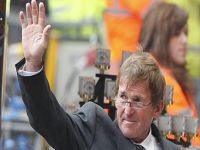 Liverpool has landed the 24-year-old Uruguayan striker Luis Suarez, after paying Dutch club Ajax 23 million GBP. Suarez is prolific: 111 goals in 159 games for Ajax and 10 goals in 30 appearances for Uruguay's national team. Now Liverpool FC, motivated with the arrival of Kenny Dalglish after the disappointing start to the season under Roy Hodgson, has the prospect of a super strike team of Suarez and Torres.

If Torres stays. Liverpool states that it has rejected a bid from Chelsea to the tune of 35 to 60 million GBP for the Spanish striker, depending on the sources (there is a get-out clause for Fernando Torres is a club offers 50 million GBP or more). Torres has scored nine goals so far in 26 games for Liverpool. Whoever his striking partner will be, Suarez is convinced that the premier League is for him: "When I see the way that Tevez plays there I think I can be a big name in England. It's because of the energy and the spirit they put into the game in England. Now, I think it's a kind of football that suits me".

Liverpool goalkeeper Pepe Reina might be moving to Manchester United, trying to find a replacement for Edwin van der Sar who retires this year. Other possibilities for United will be France's Hugo Lloris, Netherlands' Maarten Stekelenburg and Germany's Manuel Neuer, while Alex Ferguson's club continues to press the Altético Madrid goalkeeper David de Gea to sign.