Arshavin back to Saint Pete's?

Is Saint Petersburg looking to bring Arsenal star Andrei Arshavin back home? FC Porto star striker Hulk will not be joining Tottenham Hotspur, while Arsenal bolster up the defence. Will Uruguayan striker Luis Suarez go to Liverpool? For this the Premiership team will have to more than double its offer... 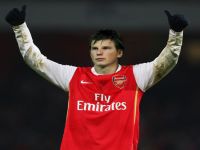 According to a report by the UK's Daily Mirror, Arsenal star Andrei Arshavin is being followed closely by his former club, Saint Petersburg, quoting the sports director Igor Korneev as saying "he graduated from our club and the doors are always open for him". The same source points out that while last season Arshavin scored 12 goals for Arsenal, this time round he is struggling, with 4 goals from 21 games.

"We would always welcome him back to the club, whether that is now or in the future," said Korneev.

The Incredible Hulk, FC Porto's prolific Brazilian striker, is not going to travel to Tottenham, according to the coach Harry Redknapp, who declared "It is not going to happen". Giuseppe Rossi, Villarreal, will also not be joining the London club.

The Luis Suarez/Liverpool sage goes on, with the Merseyside club offering just eight million GBP to Ajax, far below the 21 million GBP price tag the Dutch club is asking. Fellow Ajax player, the right-back Gregory van der Wiel is the subject of interest from Manchester City.

Championship side Portsmouth's players have been told to concentrate on their football and have been banned from making tweets on Twitter. Coach Steve Cotterill has told his players they will face a fine of 1,000 GBP per word if they tweet.