Flamengo is the destination of Ronaldinho, dispelling all the rumors to end his career in the Premier League. Already taking part in practice sessions, he is a central part of Vanderlei Luxemburgo's plans this year. 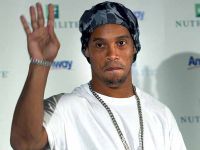 On Sunday will join the group for the friendly game with America-MG in the Coffee Stadium along with another arrival at the club, Thiago Neves. The Carioca (Rio de Janeiro) Championship begins March 19.

Ronaldo (formerly also known as Ronaldinho) hopes to do another season in Corinthians, his last as a professional player. In an interview with IG, the star said:
"I hope only that this year is a year without injuries and that I can be available for Corinthians to play most games. 2010 was a very complicated year, there were many injuries, but the final part was good and now we're there. We went to the pre-season making a big sacrifice to be good all year," said Ronaldo. In 2009-2010 he appeared in 26 of 70 games for his club.

In the Premier League, Manchester City's billionaire team is one point ahead of its great rival, Manchester United, although City have played three more games (9 points). It was the United manager Alex Ferguson, who said the games in hand are worth it only if they earn points.