Dzeko the first of an avalanche of signings

After weeks of rumours, the German Bundesliga club Wolfsburg has confirmed that it is holding talks with Manchester City, of the English Premier League, over the possible transfer of its Bosnian striker Edin Dzeko, 24, which could be the first of an avalanche of signings in the January transfer window. 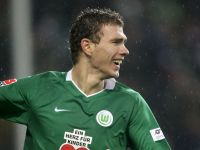 At present the talks are still at an early stage, between the agent of the player and the Chief Executive of Manchester City, Brian Marwood. The buy-out clause of Dzeko from Wolfsburg is 30 million GBP, easily affordable by the billionaire Eastlands club.

Wolfsburg, Bundesliga champions 2008-09, are having problems this year in position 13 in a league of 18. Dzeko, leading scorer in the Bundesliga last season, has scored 66 goals in 111 games, ten of these this season since joining Wolfsburg in 2007 from FK Teplice.

Dzeko could be used in a deal which sees striker Emmanuel Adebayor leaving Eastlands.

From Wolfsburg, however, just a comment from club spokesperson Gerd Voss to BBC Sport that "the silly season has begun" ... not very convincing.