David Beckham is desperate to play in Europe to boost his chances of being included in the England squad for the EURO 2012 in Poland/Ukraine. Now that a deal with AC Milan will not go through (as it had in the last two seasons), he is looking to the Premier League. 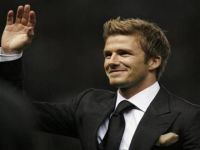 England's Premier League is arguably one of the most competitive soccer leagues in the world, on a par with the Spanish, Italian and German leagues. The deals of the last two years when David Beckham left LA Galaxy for AC Milan are not going to be repeated.

After Beckham declared that he would only rejoin the Premier League in the colours of his ex-Club Manchester United, and Alex Ferguson's club said they were not interested, now Arsene Wenger of Arsenal steps up as the likely host for the former England captain.

"I love David Beckham and when was here he was a fantastic example on the professional side. He was the first in and the last out," said the Arsenal boss. However, Arsenal's midfield is already strong and has a wealth of competition among the players:  Theo Walcott, Samir Nasri, Tomas Rosicky, Andrey Arshavin, Carlos Vela, Emmanuel Eboue...