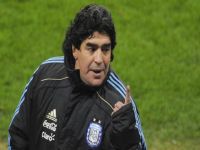 The English soccer club, Blackburn Rovers, are interested in signing Argentine Diego Armando Maradona as their new coach, according to the British press. According to several newspapers, Maradona is on the list of potential successors of Sam Allardyce, sacked the day before by surprise.

Venky Group, owner of the squad, decided to discard the coach for lack of results, being found in 13th place in the English league.

The chairwoman of Venky's, the Indian-based firm that took over the Rovers last month, admitted on Tuesday night: "We thought about Maradona as a coach after we took over. Talks were at the initial stage then, but there is no development on that front yet."

Maradona would be the kind of electrifying, flashy appointment that the Rao brothers are hoping to make as they aim to do promotion for the club, and their poultry company, to a worldwide audience. They want to give a top name to this club and the former Argentina national team coach is likely the right profile to add intense interest to the club. Actually they would be happy also just to have him associated with the club.

Diego Maradona on his 'hand of God' goal against England...

"[The goal was scored] a little with the head of Maradona and a little with the hand of God. Although we had said before the game that football had nothing to do with the Malvinas war, we knew they had killed a lot of Argentine boys there, killed them like little birds. And this was revenge."

Diego Maradona on his political affiliation...

"I believe in [Venezuelen President Hugo] Chávez, I am Chavista. Everything Fidel [Castro] does, everything Chávez does, for me is the best."

Apart from Maradona, possible successors to Allardyce to manage are the names of the Dutchman, Martin Jol, and Briton , Chris Hughton. There are also other positions that the Blackburn club might offer Maradona.

The South American former player also has deals offered to him from America and Asia, but has not yet made a decision