Schweinsteiger for United, Guardiola for Chelsea?

The English Premier League is the centre of attention not only due to hype and hyperbole but also because of the enormous quality of its teams, coaches and players. It comes as no surprise, then, that on the list of most wanted players and coaches are names like Schweinsteiger and Guardiola. 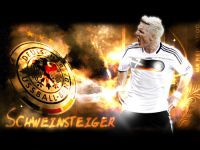 Owen Hargreaves, Paul Scholes, Michael Carrick have age issues, injury issues and skills issues. Schweinsteiger, 26, does not. Italian and Spanish clubs are close on his heels but Schweinsteiger is said to prefer a move to the Premier League.

Chelsea FC...happy with Carlo Ancelotti?  Why then is the FC Barcelona former Director of Football Txiki Begiristain being courted? Ahead of courting the chief coach Pepe Guardiola? It is said that Chelsea FC is about to do to the Danish Sports Director Frank Arnesen what was done to Butch Wilkins, which did not go down well with anyone, much less Ancelotti.