Speculation over the future of the Italian manager of Russian billionaire Roman Abramovich's Chelsea FC has been quashed by Carlo Ancelloti himself, who describes rumours that he is considering his future at Chelsea as "totally untrue". 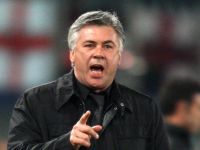 The Italian, champion of the Premier League last year, is set to stay at Chelsea FC, where rumours arose on Sunday night that he had resigned, after two lacklustre performances saw Chelsea FC lose six points, yet retain first spot in the Premiership. It was Chelsea's third loss in four games.

Ancelotti, who in his first season at Stamford Bridge won the famous double - the League title and FC Cup - was said to be upset at the sacking of his assistant coach Ray Wilkins, alleged to have been the victim of player power, while Ancelotti himself was reported to have admitted that he does not have total control over his team. However, speculation that Ancelotti had contacted the League Managers' Association after Chelsea FC chairman Roman Abramovich sacked Wilkins turns out to be untrue, it was the LMA that contacted Ancelotti after Wilkins turned to the body for support.

Michael Emenalo has replaced Wilkins as the right-arm man of Ancelotti who on Monday has bounced back defiantly, stating in a press conference: "These rumours are totally untrue. I have my contract until 2012, here, in this club. I've said a lot of times that I'd like to stay here. I love not just this club, but these players. I have a lot of confidence in these players, in this squad, so there's no reason to change my ideas. I don't know if this is enough to speak about all this".

"I think that when the team don't reach the right results, obviously the coach is under pressure. Obviously I am under pressure because I'd like Chelsea to win every game, but just this.  I am focused on my job and to give my team, my club ... to make us play better than we are at this moment. Just this," he added.

Chelsea FC is looking to sign Philippe Mexes, the Roma defender, as cover for the injured John Terry.