The name of ex-Russia coach Guus Hiddink has been linked to the future of London's Premier League club Tottenham Hotspur FC, as a replacement for Spurs' coach Harry Redknapp, in the event that he substitutes Fabio Capello as England national team manager. 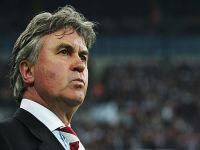 The news comes in an exclusive in soccer website goal.com which names an informal shortlist of candidates for the top job at Tottenham Hotspur FC is, as is very possible, the coach Harry Redknapp replaces Fabio Capello as England boss - likely, because the next England manager is reportedly going to be English after the tenure of the Swedish Sven Goran Eriksson and now the Italian Fabio Capello.

Top of the list, according to the source, is Everton FC manager David Moyes, who has kept Everton among the country's top clubs since 2002 on a low budget. Following Moyes on the list are popular options among the Spurs' fans and among these are former Russia national team coach Guus Hiddink (now national team manager for Turkey), Liverpool FC manager Roy Hodgson, and the man he replaced, the former Liverpool manager now under fire at Inter Milan, Rafael Benitez.

With Capello pledging to step down as England coach when his contract ends in 2012, Redknapp is the main contender, having saved Tottenham from relegation to the second tier, taking the club into the Champions League for the first time in 2010-2011.

After beginning his playing career as a midfielder at West Ham United, Harry Redknapp went on to represent Bournemouth, Brentford, Seattle Sounders and finally a second term at Bournemouth.