The English Premier League is gearing up for the January transfer market. Who will the new faces be in the world's most dynamic soccer championship? And who will be heading out? Pravda.Ru sifts through the soccer gossip pages of the British press...finding Latin Americans high on the list. 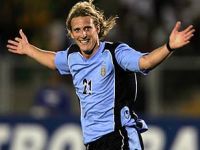 Among the world cup's sensation team, Uruguay, Diego Forlan and Luiz Suarez are both on the hit-list, Tottenham Hotspur FC being linked to Diego Forlan, the World's Best Player in FIFA South Africa 2010, while from inside Spain there is gossip that Atlético Madrid would accept a 32-million USD fee from arch rivals Real, coached by the Special One, José Mourinho. Forlan's fellow striker Suarez, currently at Ajax, has also been linked to Harry Redknapp's Tottenham.

Meanwhile Brazil's Vinicius Borges Breno, who joined Bayern Munich for 17.6 million USD from São Paulo in 2008, has aroused the interest of Carlo Ancelotti's Chelsea FC. Moving in the other direction may be Paraguay's striker Roque Santa Cruz, who finds himself frustrated after being blocked from Manchester City's first team after a 22.4 million USD move from Blackburn. Wolfsburg, Bundesliga Champions last season, have offered around 5 million USD for the unsettled forward.

Manchester City, meanwhile, are spying on FC Porto's prolific Brazilian striker Hulk, aka Givanildo Vieira de Souza, the scorer of 13 goals in 13 games so far and two last weekend in Porto's 5-0 thrashing of arch-rivals SL Benfica. However, surely even the billionaire club from Eastlands would baulk at the 100-million Euro rescission clause.

Bolton FC are eyeing up Argentinos Juniors defender Santiago Gentiletti while CSKA Moskva striker Keisuke Honda is awakening the interest of Liverpool FC, anxious to build on their recovery after a very poor start to the season.

France seems the target for Aston Villa's French coach Gerard Houllier, who wants the France striker Befetimbi Gomis to replace the disaffected John Carew. Another striker possibly joining the Premier League is Montenegro's Mirko Vucinic, the AS Roma striker being the subject of contention between Bayern Munich and Chelsea FC.

The Serbian defender Neven Subotic is a possible reinforcement for Arsenal FC's young squad managed by Arsene Wenger, who may consider that the Borussia Dortmund striker could being more poise and balance to the attack. Finally, Rafael Benitez, currently coach of Inter Milan, is said to be considering a raid on his former club Liverpool FC for Danish central defender Daniel Agger.