Manchester City: Hundreds of millions spent but dark clouds on the horizon 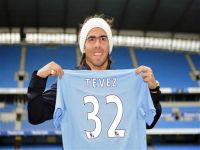 Despite spending hundreds of millions of GBP on players since 2008, Manchester City FC seems to be fighting for fourth place in the Premier League, with Tottenham Hotspur FC (London), leaving the top three places to London's Arsenal and Chelsea and City's larger neighbour, Manchester United.

After the takeover by the Abu Dhabi United Group in August 2008, Manchester City FC has spent a sensational 355 million GBP on players...and the figure is set to rise exponentially in the forthcoming January transfer market. Top signings for the Eastlands club were Robinho (the Brazilian striker who smashed the British transfer record in 2008/9 at 32.5 million GBP); in the same season, Nigel de Jong (16m. GBP), Craig Bellamy (14m. GBP), Wayne Bridge (10m. GBP) and Shay Given (5.9m. GBP).

The total is 355m. GBP on players, 487.8m. GBP on salaries, the takeover cost of 210m. GBP and 20m. GBP spent on the stadium and training ground improvements...and Sheikh Mansour of Abu Dhabi has spent over one billion GBP.

Roque Santa Cruz wants out. He cannot get a place in Mancini's system of one striker playing ahead of a packed midfield and with City scouring the January transfer market for a top class striker (possibly Wolfsburg's Bosnian Edin Dzeko), the Paraguayan striker states that "I am not getting the playing time to convince anybody and my priority is to leave in the January transfer market".

But it is not only Santa Cruz, who has revealed that his team-mate Carlos Tevez is pining to go back home to Argentina: "He wants to be among his people, who are in Argentina". Santa Cruz considers that "City's goal must be to be among the top four. We are below the level of those who will fight for the title". After spending one billion pounds?