Where Sport and Development walk hand in hand: Marta to represent UNO

The world's best ever female soccer player, the Brazilian Marta Vieira da Silva, is to represent the United Nations' Development Program, advocating for women's empowerment, in an effort to fight against global poverty. Appointed Goodwill Ambassador in Stockholm, Marta declared she will promote global efforts to reach the anti-poverty Millennium Development Goals. 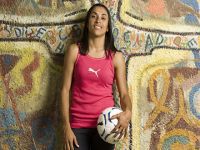 Marta Vieira da Silva, 24, declaring "I have been given opportunities to succeed in life", added "I constantly think about the ones who did not have this chance. We all need to contribute to help defeat poverty". Stating that she was "proud to add my personal commitment to this work", Marta said that UNDP "works around the world making a positive difference in people's lives".

Marta has been described as the greatest female soccer player in history. Born in a neighbourhood in Dois Riachos, in the Brazilian state of Alagoas, she won the FIFA Women's World Player of the Year in 2006, 2007, 2008 and 2009 and currently plays in FC Gold Pride, in the USA.

Helen Clark, UNDP Administrator, has described Marta as a "role model for women and girls around the world" and explained that she was chosen because "she has inspired them to play football, so she will inspire others to come together in achievement of the Millennium Development Goals".

Marta began her career in the junior teams at CSA, then as a professional, started in Vasco da Gama in 2000 for two years, being transferred to Santa Cruz, for a further two years. From here, she left Brazil for Umea IK of Sweden where her international career was launched.

In the Brazilian national team, she won the Gold Medal in the Pan-American games in 2003 and 2007 and the silver medal in the Athens Olympics, 2004. After the 2007 Championship, she was compared to Pelé, being nicknames "Pelé in skirts". She was elected Best Women's Soccer Player of the year from 2006 to 2009.