After suffering injury problems and being booed in the second stage, the Brazilian men's volleyball team overcame the odds and won the third volleyball World Cup played in Italy, beating the National Team of Cuba by three sets to 0, with the scores 25/22, 25/14 and 25/22.

Brazil put on a volleyball show and stunned the audience by walking over the Cuban team, in Rome, the eternal city of the Emperors and won the third world volleyball championship. 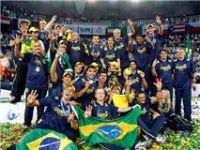 With a third consecutive title, Brazil equals the record of the host nation Italy in the 90's which managed the same feat by winning the competition in 1990, 1994 and 1998.

With determination, competence and coolness, experience won the day in the duel against the Cubans. Even with much of the crowd at the Gymnasium Palalottomatica in Rome, against Brazil, the team's coach Rezende closed the match in three easy sets to nil.

With flawless performances from Dante and Leandro Vissotto, who had been decisive in the semifinal against Italy, Brazil had fun.

Bernardinho got an honor never before achieved by another coach, becoming the first triple champion in successive competitions in volleyball.

The victory over the Cubans crowns the renovation of the Brazil team, which startter the silver at the Olympic Games in Beijing in 2008.

Before the first point, it became clear that the crowd would be in favor of Cuba. In the first serve of the match made by Murillo, the Italian public booed the Brazilians. After an early break, the squad began to open the advantage.

With three consecutive strokes, he dismantled the Cuban reception and the Brazilian team opened 6-2 on the marker. In an ace by Dante, when he went to serve, Brazil reached the first technical stop winning by 8-3.

The Cubans continued to show reception problems. Playing patiently, Brazil was turning the ball well, and reached the second technical time with a tranquil 16-10.

With Leon and Leal, the Cubans were growing slowly in court and bringing a bit of danger to the Brazilians. When the gap narrowed to three points (20-17), the coach Rezende, Brazil, stopped the game to stop the opponents' momentum, but it did not result. Hernandez narrowed the gap to two points.

Brazil had to regain focus to close the game and Bernardinho made a traditional inversion between the lifters. In a cut from the reserve Théo, Brazil managed to get ahead in the game scoring 25 to 22, 1-0.

With silly mistakes by the Cuban attack, Brazil began the second set in overwhelming force. While the Caribbeans scored the first point, the score was soon 4-0. The blockade of Brazil worked well and at the first technical break the score was 8-3 for Bernadinho's team.

Cuban coach Orlando Blackwood tried to change tactics a little, pulling the lifter Hierrezuelo back and sending on Diaz. The replacement took effect at the beginning, but Brazil resumed its wide margin and opened up 11-6, forcing the Cuban coach to ask for a time-out.

The Cubans seemed to be feeling the pressure of playing their first World Cup final, and the return was taking care of Leon and Simon. Brazil finished the second set with an easy 25 to 14.

The third set began more disputed. With Brazil a little relaxed, the Cubans managed to level the match until shortly after the first break. But Brazil regained momentum and continued to play like they were on fire.

In the second time-out, the score was 16 points to 11 for Brazil. This advantage allowed Brazil to play it cool, exploiting the blocking move. But the Cubans still managed to reduce the advantage and Brazil halted the match. Finally, the Brazilian blocking tactic resulted, and the title came to Brazil with 25 to 22.

ANTONIO CARLOS LACERDA is International Correspondent for the Portuguese version of Pravda Ru in Brazil.