It's the Red Revolution at Liverpool FC

One of Europe's most feared and respected soccer clubs sits near the bottom of the English Premier League firmly in the relegation zone. The former Red Devils of Liverpool FC, once all-conquering mavericks of European soccer, with their indomitable style of play, hitting the ball hard and low around the midfield, upfield to breath-takingly skilful strikers, are today minnows, losing at home to unheard-of clubs abroad such as Blackpool and Northampton. 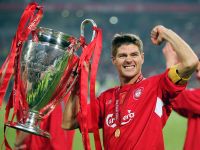 "This is Anfield" is the last (terrifying) thing a visiting player sees as he emerges from the tunnel to the deafening roar of the Liverpool FC home crowd, generations of football fans brought up on a glut of victories. Today the voices are more of confusion and contestation, as the last days of the Hicks-Gillett mismanagement of the club stare them in the face and as the American duo try desperately to cling on to power as co-owners of Liverpool FC.

But times are changing. The Red Revolution is coming.

In a boardroom coup, the Chairman of Liverpool FC Martin Broughton, Commercial Director Ian Ayre and Managing Director Christian Purslow are trying to push through a buy-out deal to New England Sports Ventures, NESV, which owns the Boston Red Sox Baseball team. NESV claims the deal has been accepted by the Liverpool FC board, and all are happy. The new prospective owners, a consortium led by the US billionaire John W. Henry, have vowed to clear the club's debts of 280 million pounds, state they will give the beleaguered coach Roy Hodgson time to rebuild and pledge money for him to buy the players he wants.

All except Tom Hicks and George Gillett, that is, who claim the 300 million GBP deal undervalues the club by half, and who are desperately trying to block the deal by removing Puslow and Ayre with Mack Hicks (Tom's son) and an American associate of theirs, Lori Kay McCutcheon.

In a statement on the deal, the prospective new owners of Liverpool FC claim: "NESV wants to create a long-term financially solid foundation for Liverpool FC and is dedicated to ensuring that the club has the resources to build for the future, including the removal of all acquisition debt".

The statement adds that "Our objective is to stabilise the club and ultimately return Liverpool FC to its rightful place in English and European football, successfully competing for and winning trophies. Since 2001, New England Sports Ventures has made successful investments in sports and entertainment properties".

"Our portfolio of companies - including the Boston Red Sox and Fenway Park, New England Sports Network, Fenway Sports Group and Roush Fenway Racing - are all committed to one common goal: winning".

The message is out, loud and clear: Liverpool FC is on the verge of a Red Revolution, leading the Reds back to their glory days at the pinnacle of European Soccer. The coach, Roy Hodgson, has the experience and ability to pull it off, having coached at club level in Sweden, England, Italy, Denmark, Switzerland, and having coached the national teams of the UAE, Finland and Switzerland.

He won 4 championships, 6 Allvenskan and 2 Cups in Sweden; the Danish Super League and Super Cup; was UEFA Cup finalist with Inter Milan and Fulham and was voted Manager of the Year in 2010 (LMA, England). He speaks fluent English, Norwegian, Swedish, Portuguese and Italian and has a working knowledge of German, Danish, French and Finnish.