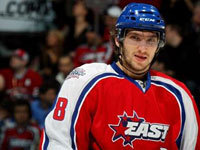 Alexander Ovechkin, a Russian professional ice hockey left winger and captain of the Washington Capitals, is going to record a song with internationally known rapper Eminem. NHL's top paid player is a big fan of hip hop, and he is very happy that now he will have a chance to become a part of it with a legendary artist.

"It would be such an honor for me, because I am a big fan of Eminem. I always have his CDs in my car, and I would be very glad to meet him. By the way, Eminem's 8 Mile film is just great," Alexander told Life Sports.

Ovechkin is not going to become a part of any film projects yet. As for the song, it is not clear yet, when the track is going to be recorded. Most likely, there will be a video to the song. NHL managers are currently in talks with Eminem's representatives. Spokespeople for the league say that it would be great PR for hockey.

Alex Ovechkin already has experience in recording music. A couple of months ago he recorded a song with Russian rapper Zhigan. The forward said that he dedicated the song to his girlfriend Valeria Sokolova.