We love you, Uruguay! The fifth selection in Latin America to qualify for the finals of the 2010 FIFA World Cup ends up staying until the 10th of July, and let us recall the list of who have already gone home. Is this the rebirth of Uruguayan Soccer, colossus in the history of world football, a sleeping giant who now awakens. Welcome back, we love you! 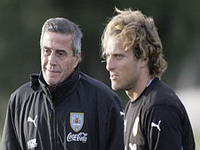 The players of Oscar Washington Tabarez are heroes because they managed to do in the 2010 FIFA World Cup in South Africa what no other team could do: work, sweat, fight, bleed ... and feel, respect, honor and breathe the pride of wearing their shirt . The love of their country shows in their souls, in their eyes.

I t does not matter if this wonderful selection comes in third or fourth next Saturday, because Uruguay has risen once again to a pinnacle in the history of world sport, has written his name indelibly in the annals of football. That look on the face of Diego Forlan as his team conceded a goal, was the look of a patriot, a national hero and role model for millions of football fans around the world, an example for any professional in any field of work.

It's the look of a person dedicated to what (s)he does, that surpasses all expectations because (s)he has talent, is responsible, works and feels love for her/himself before anything else. It’s about looking in the mirror in the morning and feeling good.

What this team has done during these few weeks was to mark the position of Uruguay firmly on the map, but more importantly, the soul of human consciousness, instilling a shining example of professionalism and demonstrating success through working together.

Not only for professional football, but this attitude also sets a great example for any team, any set of persons, in any situation. It i s the spirit of this group led by Oscar Washington Tabarez which touches us, inspires us and feeds us. Thank you, Uruguay. While France came out on strike, while England, Italy, Argentina, Brazil caught early flights home, you worked, you believed, you wrote poetry.

From the bottom of my heart to all our correspondents in Uruguay, thank you. And be proud. You deserve it.