The power of Latin football, the failure of African football to make its mark (yet) and the impotence of some of Europe’s main teams are the main conclusions that spring to mind after the second phase of South Africa 2010. These, apart from FIFA’s refusal to embrace technology which has already had a major impact on the results. 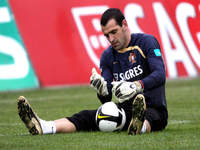 For those who doubted South Africa’s capacity to organize a World Cup Final, the response has been as categorical as it has been overwhelming. While the international press was trying to whip up gloom and doom stories (after all, this is Africa), South Africa had started, two years ago, to send daily news reports called “The Good News”. Where did these appear? Nowhere, predictably (except PRAVDA.Ru)…and as for the games…

The power of Latin football, the failure of African football to make its mark (yet) and the impotence of some of Europe’s main teams are the main conclusions that spring to mind after the second phase of South Africa 2010. These, apart from FIFA’s refusal to embrace technology which has already had a major impact on the results.

Four of the last eight teams are from Latin America (Brazil, Argentina, Uruguay and Paraguay), one from Iberia (Spain), two from northern Europe (Germany and Holland) and one from Africa (Ghana).

Africa, despite producing sides that play together as teams, producing wonderful passing football, and despite the fact that the globalization of knowledge has seen many of them landing top coaches (Eriksson for example) still has to make its mark.

As regards the last 16, Uruguay continues to be a prime candidate (for the author of this column) for the final. Organization, discipline and delivery are the three key words of Oscar Tabarez’s team which should surpass the obstacle provided by Ghana. Against whom in the semi-finals?

If Brazil plays its best football, right from the start, then it will be a Latin American semi-final. If not, it will be against the clockwork orange (Holland).

Germany beat England. A great team beat a good team. However much was said in the British press, how many times has the England team been in the World Cup Final? Once, in England, in 1966. I rest my case.

Germany meets Argentina, the team that has the charisma of Maradona behind it and given the genius of his “guiding influence” as he says and his key players (gala players), the unstoppable force of Latin America meets the immovable mass of Deutschland. The result will be fascinating but genius usually beats workhorses.

Finally, Spain vs. Paraguay. Portugal suffered one single goal in the entire campaign and this was enough to send Cristiano Ronaldo and his companions home early. Why?

Not because the coach was bad (Carlos Queiroz has a twenty-year pedigree of success), not because the physio team was bad (Antonio Gaspar is perhaps the best sports physio in the world) but because, as always, Portugal has a pathological fear of winning, preferring instead, like England, to suffer and find excuses while the others move on.

And so here we have FIFA’s perfect mix, without technology, of four teams which have won the competition (Brasil, 5; Germany, 3;Argentina and Uruguay, 2 each) and four teams which represent traditional and new powers in Europe (Holland and Spain), traditional and new powers in Latin America (Uruguay and Paraguay) and the token African team, Ghana.

Was any of this fixed, perchance?