Kaka, Impunity and the World Cup

If anyone can explain why Brazil’s Number 10, Kaká, was sent off against the Ivory Coast, while Keita and Tiete remained on the field after horrific studs-first leg-breaking fouls against Michel Bastos and Elano (the latter being literally taken out of the game) than I would appreciate it. 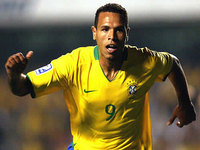 Kaka, Impunity and the World Cup

Nevertheless, Brazil is classified for the last 16, Paraguay almost (needing a draw against the revelation team, New Zealand), while Italy has it all to prove.

Villar watched on as his counterpart in the Slovakian goal, Mucha, had to work hard, denying Riveros on 19’, Santa Cruz again on 37’ and 39’ but he was powerless to stop Vera’s shot after a fine pass by Lucas split the Slovakian defence on 27’.

Slovakia tried to press forward in the second half but the real danger was provided by Paraguay. 72’, Vera. 77’, Torres went near, until on 86’, 2-0, a powerful shot by Riveros which left Mucha without any chance from the edge of the area in front of goal. Villar finally had to intervene, making a great save from Vittek on 90’ + 2’.

The first half belonged to Italy as far as attacking football is concerned but to New Zealand in coming in at half time with a great result: a 1-1 draw against the world champions, Smeltz giving the New Zealanders the lea, firing home a loose ball on just 7’.

Mark Paston was in great form, denying Montolivo on 9’ (the same player hit the post on 28’). Smith brought down De Rossi (FIFA Man of the Match) on 29’ for Iaquinta to score the penalty. Before the break, Paston saved from De Rossi (45’).

In the second half, more pressure from Italy and more great form from Paston, who pulled off saves to deny Di Natale on 49’ and again on 50’ and Montolivo on 70’

Italy’s 15 corner kicks to New Zealand’s zero are witness to attacking play. The result is witness to the inefficiency of this attack.

Brazil promised to deliver from the start: Robinho sent a rocket just high in the first minute of the game. After Brazil’s first corner (19’) Robinho’s shot in front of goal was blocked. Brazil’s goal came on 25’, Luis Fabiano shooting high into the net from the right. Ivory Coast’s main threat came on 38’ when Dindane tried a shot, easily gathered by Julio Cesar.

First half: Brazil three corners, Ivory Coast none; Brazil – three shots on target and one goal, Ivory Coast one shot, no goals.

2-0 on 51’ Luis Fabiano again, dancing round three defenders. Ivory Coast tried to attack and on 54’ Drogba headed wide from a good position. Barry saved Kaká’s shot on 62’ and within seconds, Brazil’s number 10 passed inside from the left to Elano. 3-0. Ivory Coast became violent. And we saw that in South Africa 2010 there are two weights and two measures, in favour of African teams: Elano was taken out of the game and nothing happened to the perpetrator. Kaká was sent off for getting two yellow cards for fouls, either one of which was innocuous compared with the leg-breaking tackles being meted out by Ivory Coast players.

On 79’ Drogba got the goal of honour for Ivory Coast, a team which today through their violent football, lost a lost of friends.