Cameroon bows out of this World Cup but with its head held high, after an astonishing display of football which would leave any of the European teams proud. Fate had it that the team failed to get to grips with an aggressive Japan in the first match and failed to take its chances in the second against Denmark. Nevertheless, Paul Le Guen’s team will be remembered for some fantastic team play. A demain! 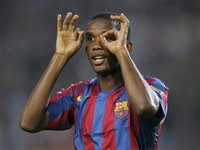 Wesley Sneijder, FIFA Man of the Match, was the hero of the day for Holland, scoring the only goal of a match with few opportunities, due to the organization of the Japanese team, on 53’.

Holland had the possession, 61% to 39% but the Japanese closed behind the ball, inviting the Dutch to make a mistake and counter with lightning counter-attacks. Japan, however, had 10 shots to Holland’s 9 and 5 corners to 4.

The first half can be summarised by a shot from Matsui on 38’ and one from Van der Vaart on 45+1’, both saved by the goalkeepers. In the second half Holland came out more determined, and on 46´, Kawashima saved a strike from Van Persie, who on 53’ found Wesley Schneijder on the edge of the area. 1-0.

On 75’, Okazaki, who had come on for Hasebe, blasted over from close range.

An action-packed first half with two goals (one penalty, Ghana’s second) and a sending-off. Australia went ahead on 11’ through Holman but Ghana went from strength to strength, gaining their second penalty of the tournament (the first gained three points from Serbia), struck by Asamoah Gyan, FIFA Man of the Match (25’), in a move which saw the sending-off of Harry Kewell (the ball hit his upper forearm). It was Gyan’s second penalty in two games.

Down to ten men, Australia looked the weaker side in the last twenty minutes of the first half. Ghana had 4 corners, Australia none.

On 50’, Schwarzer saved a shot low to the left by Asamoah Gyan. 66’: Sarpei just failed to connect with a cross in the Australia goalmouth. 71’ double save by Ghanaian goalkeeper Kinson from Wilkshire and Kennedy. Australia pressed more in the second half and did well with ten men against eleven but the 1-1 reflects a balanced match and a just result.

Denmark, however, came back into the game. After twenty minutes of end-to-end football, but with the Danes threatening more, Bendtner scored the equaliser on 32’ after an excellent pass from Kjaer to Rommedahl. The excitement continued until the end of the half, with Eto’o hitting the post on 43’ after another defensive mix-up by Denmark.

On 46’ Mbia tested Sorensen, who saved his shot. 60’ Webo fired at Sorensen in front of goal. 61’, Rommedahl scored for Denmark after receiving the ball on the right, dribbling into the box and firing past Souleymanou.

Cameroon reacted but on 70’, Suleymanou saved from Tomasson in a good position in front of goal. On 72’, Paul de Guen took off defender Bassong and sent on forward Idrissou, trying to galvanise the attack. Sorensen saved Emana’s shot on 77’ as the African team swept forward looking for the equaliser.

Le Guen sent on the fourth forward player, Aboubakar, substituting Webo. Despite playing a mesmerising game of football, Cameroon could not put the ball in the net and bow out of the competition, but with their heads held high. FIFA Man of the Match: Daniel Agger (Denmark)