Uruguay On the Way to Title Number Three?

The organization of Tabarez and the genius of Diego Forlan and his team-mates are the spice which seasons an excellent Uruguay team in FIFA 2010. 180 minutes of football played, four goals scored, none against (opponents former world champions France and host nation South Africa). Uruguay has not yet delivered, but promises. 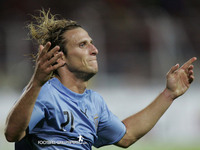 Uruguay On the Way to Title Number Three?

Chile fulfilled its obligation, taking three points from the game with Honduras. As for Spain, possibly on another night the team would have won 4-0 against Switzerland; however, yet again, organization overcame skill and Switzerland leads the group – not to discount the experience and expertise of coach Ottmar Hitzfeld.

Chile was the more aggressive team from the outset, Fernandez testing Valladares after just three minutes, putting a corner just over. Chile’s 5 corners to Honduras’ 2 in the first half is proof of this, converted into a goal on 34’ by Beausejour (FIFA man of the match), finishing a move involving Valdivia and Isla.

The nearest Honduras came to threatening the Chilean goal was already after 45’, when Bravo saved Nuñez’s free kick.

On 64’, Valladares had to make two miracle saves within a minute, again denying Valdivia. Chile, more offensive, with more possession of the ball, deserved the three points.

In the second Group H game of the day, in Durban, closing the preliminary cycle of matches, Spain was far more aggressive, playing with confidence against a determined and well-organized, physical Swiss team. While Switzerland got the first corner after 8’, within a minute, Spain had 4 players looking dangerous in the Swiss penalty area.

Benaglio had to make a world class save on 24’ to deny Pique, who shot from close range in the goalmouth.

On 36’, Senderos, injured, was substituted by fellow central defender Von Bergen, using up one of Ottmar Hitzfeld’s options. Switzerland, however, did not limit its operations to defence and ended the first half with as many corner kicks as Spain – two.

If Spain repeatedly threatened to be dangerous in the first half, in the second, del Bosque’s team had had 4 corners by 50’, Benaglio and the Swiss defence having to work hard to keep out a more spirited Spanish attack.

Yet…on 52’ totally against the run of play, a lightning counter attack, a goalmouth scramble and Gelson Fernandes (FIFA man of the match) poked the ball home, 1-0 to Switzerland. Benaglio had to race off his line to deny David Villa on 59’ and on the hour, Del Bosque sent on Torres for Sergio and Navas, for Silva.

On 70’, after Spain’s eighth corner, just in the second half, Alonso sent a rocket against the woodwork which Benaglio would have had no chance to save.

73’, Switzerland could have made it two; this time it was Casillas, beaten by Derdiyok, who saw the ball rebound from his left post. Del Bosque sent on Pedro for the injured Iniesta.

Switzerland managed to hold out despite the extra time added on (the game was nearly 96 minutes long) and pulled off the shock of the day. The Swiss defence, a veritable mountain, has now gone 5 games in World Cup finals without conceding a goal. Now we will see whether it is Switzerland and Spain or Switzerland and Chile that face Brazil and…Ivory Coast?

Diego Forlan (FIFA man of the match), national hero of Uruguay tonight, was the first player in this World Cup to score a brace of goals in Uruguay’s 3-0 destruction of host team South Africa at the Loftus Versfeld Stadium in Pretoria, where the team had been unbeaten before tonight.

Uruguay started to threaten on 23’, when Suarez saw Khune save his searing shot and on 24’, Forlan pounced from 30 metres, sending his shot screeching into the top of the net with Khune stranded. A world-class strike and candidate for goal of the competition.

Uruguay had several half-chances before Forlan scored his brace. On 76’ Khune brought down Suarez (a polemical decision, but FIFA does not allow hi-tech to interfere with “the spirit of the game”) and was sent off. Forlan belted the penalty past the second goalkeeper, Moneeb Josephs.