Paraguay held the World Champions Italy to a 1-1 draw in Cape Town today (both goals coming from set pieces). Holland, predictably, beat Denmark, becoming another sound contender for the title alongside Germany and Japan was true to itself, beating Cameroon with a display of power football. 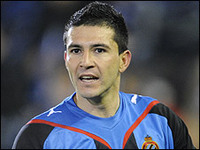 Holland won the game because the team attacked more, however the first goal was scored by a Dane (own goal by Simon Poulsen after 46’) and five minutes before the end, Kuyt buried the ball, and the game, in Sorensen’s net.

Denmark kicked off with a sense of purpose that saw Rommedahl skip past two defenders and almost set himself up for his shot, before he was fouled. The rest of the first half followed the same pattern as the preceding games of soccer, with neither side willing to take risks, attacking and defending in a block. Holland’s 4 corners to Denmark’s 2 perhaps sums up the share of attacking football.

After the break, 1-0 for Holland, an own goal scored by Simon Poulsen on 46’, heading in the cross by Holland’s Robin van Persie, the ball hitting Agger’s back. After this, it was a repeat performance, Denmark making the occasional foray, Holland being the more aggressive side and having more possession. Denmark’s coach Morten Olsen tried to inject some fresh ideas into his side, using all three substitutes by 73’.

Holland wrapped it up on 85’ when Kuyt poked the ball home after Wesley Sneijder (FIFA man of the match) set up Elia, whose shot came back off the post.

In total, Holland had 6 corners to Denmark’s 2.

CSKA midfield player Keisuke Honda (FIFA Man of the Match) scored the only goal after 39 minutes, giving Japan the three points it needed to sit on top of Group E alongside Holland, 2-0 winners over Denmark.

Both teams had tried to probe openings in their opponents’ defences, when on 39’, Daisuke Matsui found Honda with a cross that sailed over the Cameroon defence. Honda was waiting on the right, controlled the cross and shot hard past Souleymanou. 1-0.

Before then Eto’o, Webo and Choupo Moting had created flashes of brilliance and after the interval, the same names started to create more chances for the West African team, culminating in Mbia’s shot against the post. Japan held on and meet Holland on June 19.

Practically the only direct chances of the game were the two goals scored from set pieces, first by Paraguay’s Antolin Alcaraz (FIFA man of the match) after 39’ and by Italy’s Daniele De Rossi (63’).

Torres (Paraguay) set himself up in a good position in front of goal on 22’ but shot wide, Paraguay’s goal coming from a free kick by Torres, which Alcaraz headed past Buffon. After the interval, Pepe had two half-chances for Italy before he swung a corner kick into the area for de Rossi to shoot into the net, with Justo Villar out of position.

Villar kept Paraguay in the match with three wonderful saves as Italy piled on the pressure.