England might have started as the international sports media expected, scoring after 4’ (Gerrard) after a nice build-up involving Lampard and Heskey but the USA reacted as predicted in this column before the World Cup finals started. 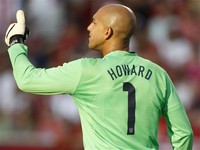 After 12/13 minutes the USA showed what they could do with a series of 3 corners in quick succession and on 19’, Altidore just failed to connect with a cross in front of goal. England replied through Aaron Lennon, who created danger on the right of Howard’s goal but failed to find Rooney, marauding in the center of the area.

Lennon again created danger on 28’, a situation which resulted in a corner. Milner was taken off after half an hour, after gaining one yellow card and looking like he would get a red. His substitute, Shaun Wright-Phillips, did nothing for the rest of the evening.

After 40’, predictably, 1-1. It was a question of time before an England player did something stupid. Green let a Dempsey shot trickle past him after a lacklustre save.

Capello brought on Carragher for King after the break; on 48’, Aaron Lennon just failed to find Rooney in the area and on 51’, Howard pulled off an excellent save denying Heskey who decided to shoot at the keeper instead of pulling his shot high or wide.

Green made up for his dreadful mistake on 40’ by making a world-class save, turning an Altidore shot against his post on 62’, after which England grew but without managing any penetration beyond the penalty area. Wright-Phillips shot straight at Howard on 75’. The tired Heskey, who had a great game, was substituted by Peter Crouch but by then both sides seemed to have settled for a draw. Given the positions in the FIFA rankings (England 8th and the USA 14th) this draw favours the USA more than the UK.

Much may now depend on how many goals each team scores against Algeria and Slovenia, the other teams in Group C.

FIFA man of the match: Howard (US goalkeeper)