France 0 Uruguay 0: Tabarez does it again!

Group A completed its first day of matches with another draw, this time a goalless affair between an organized Uruguay and a French team playing with passion but without flair. Uruguay coach Oscar Tabarez has once again created a Uruguay team playing as one and playing to its strengths. 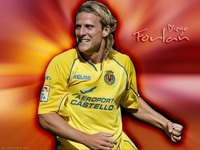 France 0 Uruguay 0: Tabarez does it again!

The first part was balanced, France pressing forward more than Uruguay but with the Latin American team managing to keep its six-man defence organised and behind the ball, closing the French forwards down and restricting them to long-range headers or shots which caused no problems to Muslera.

The best chance of the first half fell to France, after 6’, when Govou missed the ball in the goalmouth with only Muslera to beat. By then Uruguay’s game-plan was evident. It was to block the area in front of goal with an organized defence and break out with lighting counter-attacks trying to find Diego Forlan. The Atlético Madrid forward, twice Golden Boot winner in Europe (best scorer) showed why he is so respected after 16’ and 23’, first when his shot was blocked and then when he ran at the defence, finding one too many defenders as he threatened to break through.

France had two avoidable yellow cards awarded, first to the Captain, Evra and then to Ribery, for shirt pulling and holding, respectively, incidents which the team may regret later on.

Tabarez, national team coach in 1990, the last time that Uruguay went past the group stage of the championship, sent his team out after the break looking for the goal. Uruguay started faster and more objective, but the pressure was momentary and came to nothing.

After 60’, France started to press forward but always came up against the six or seven-man barrier in the Uruguay defence. Ribery totally miscued his shot in front of goal on the hour and at the other end, a rare Uruguay foray saw Forlan shoot his free kick straight at Lloris.

With stalemate settling in, the substitutions started, predictably, at 70’, with twenty minutes left to play. Anelka was substituted by Thierry Henry, France’s leading goal-scorer and hero of four world cup finals (1998, 2002, 2006, 2010). Forlan, FIFA man of the match, almost immediately responded with Uruguay’s best chance of the game and the only clear-cut goal-scoring opportunity of the second half, shooting wide when set up in a position in front of goal.

After this, tactics. For Uruguay, Tabarez replied by taking off Suarez and sending on Abreu. France’s Raymond Domenech sent on Malouda and took off Georcuff, trying to refresh the French attack and on 80’, a moment of madness saw the Uruguayan Lodeiro, who had come on as substitute for I. Gonzalez twenty minutes earlier, receive his second yellow card for violent play against Sagna – and the tournament’s first red.

Uruguay managed the remainder of the game, defending with ten men. With five minutes remaining, Domenech brought on Gignac for Govou, Tabarez took off Perez and sent on Eguren.

It was hardly a case of an irresistible force against an unmovable mass, more a lucklustre France playing well but not brilliantly lacking ideas to break down a resolute and determined, organized Uruguay, whose counter-attack, if the defence keeps a clean sheet, could do the damage.