South Africa (Bafana Bafana – “The Boys” in Zulu) and Mexico (El Tri, after the three colours in their kit) provided an excellent start to the FIFA World Cup 2010 this Friday June 11 in Johannesburg JSC at 16.00 SA Time with an entertaining game of soccer which ended in a 1-1 draw, both goals coming in the second half. 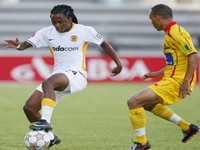 Mexico kicked off this Group A match, got the first yellow card and came closest to scoring in a goalless first half in which the hero was the South African goalkeeper, Khune, who made two fabulous saves. The first came before 2’, when he charged down a header by Guillermo Franco and the second, half an hour later, again from Franco, after the Mexican forward chested the ball down and shot from close range. Khune’s reflex save looks set to be among the best this competition will see.

Apart from these chances, Mexico saw efforts from dos Santos (4’ and 18’), the son of a Brazilian soccer player, and Franco (40’) go just wide after Carlos Vela had put the ball in the net, but from an offside position.

The opening stage of the game belonged to Mexico but South Africa started to string their game together, growing after 15’ and ended strongly, with four corners in quick succession. The growth and confidence process continued after the break. South Africa’s Brazilian coach, Carlos Alberto Parreira, had substituted Thwala for Masilela at the break and after 57’, Tshabalala, Man of the Match, opened the scoring for the home side, receiving a perfect defence-splitting pass, firing his shot from the left high into the top right-hand corner of Oscar Perez’s net and sending most of the 84, 490 fans into delirium.

Mexico’s lively dos Santos demanded another spectacular save from Khune on 61’ as Mexico tried to turn the game, Jaime Aguirre sending on Guardado for Aguilar, then Blanco for Vela. However, it was South Africa who kept pressing forward, a wonderful passive move starting with Modise and Pienaar seeing Mphela shooting wide on 69’. On 72’, Oscar Perez rescued Mexico with a fine save, blocking Modise in front of the goalmouth.

Aguirre used his third substitution on 73’, bringing on Hernandez for Franco. After this Mexico once again started to grow and after 79 minutes, Marquez levelled the score after receiving a cross from Guardado. Parreira tried to keep momentum going for South Africa, sending on Parker for the tiring Pienaar after 82’.

This excellent game of football went right to the wire, Hernandez heading over Khune’s goal with three minutes of normal time remaining and one minute before the end, Mphela made a spectacular run through the middle of defence but sent his ball against the bottom left-hand post.

Mexico are a useful side with some excellent players, like dos Santos, Salcido, Juarez, Aguilar, the main failing being that they are very slow breaking out of defence, while South Africa work around a solid defensive block, freeing their forward players who look very dangerous when running at the defence. However, the central defenders looked disorganized on several occasions during this wonderful opening game of soccer.