Forty-seven million people in South Africa feel the pulse of their nation and feel the pulse of Africa coursing through their veins. Bafana Bafana (The Boys), or the South African soccer team, is waiting, confident, determined and resolute to do the job. Quite what that will be we shall see, but many may be in for a surprise. 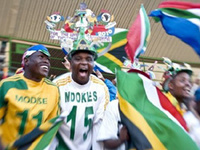 South Africa’s Brazilian coach, Carlos Alberto Parreira (67) has hoisted the World Cup before, leading his country to victory in 1994 in the USA. He also has perhaps more experience than the rest of the World Cup coaches put together.

Tomorrow, Bafana Bafana kick off against Mexico, certainly to the chorus of the vuvuzela, a crescendo of sound and bonhomie and love as Africa welcomes the world. For Carlos Alberto Parreira, South Africa is ready, is prepared and is waiting, like a cheetah observing its prey.

“We fear nobody,” he stated after the win over Denmark (1-0) a week before the Championship started, claiming that his main objective, to give his side its own identity and style of playing, has been reached.

South Africa play a possession game, moving forward through short passes. This is a difficult game-plan to beat, specially in front of a home crowd as motivated as the South African one. Whatever the result, Carlos Alberto Parreira promises to make his chosen country proud, as he did with Brazil.

This, he will certainly do. Tomorrow we may have a better idea of how far Bafana bafana can go.