England and the USA lock horns this coming Saturday evening in Rustenburg. England, eighth in the FIFA ranking, are feeling confident ahead of the first game in Group C against a team which has eight members playing in the Premier League, and is ranked just six places below. USA midfield player Landon Donovan says the States is ready to go, but heaps praise upon ex-England Captain David Beckham. 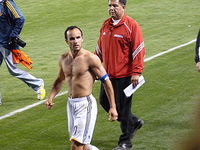 Landon Donovan, 28, currently plays for LA Galaxy alongside David Beckham, the ex-England captain and fellow midfield player, unable to play in the World Cup Finals due to an ankle injury sustained while playing in the US off-season for AC Milan. For his team-mate, Landon Donovan is full of praise.

In an interview with FIFA.com, he stated that Beckham has done more than anyone else to focus public awareness on Soccer in the USA, where the most popular sports continue to be American football, baseball, ice hockey and basketball, before soccer in fifth place, enjoying the same popularity rate as handball in many European countries.

Stating that “David has been terrific in every way” on the field, Donovan, who played at Everton FC in the Premier League this season, added that “off the field, he has almost single-handedly brought an awareness to our game that wasn’t there before…he puts a lot into helping grow the game in our country and we all appreciate that”.

Regarding the crunch game in Group C, he said that for the last six months, the media in the USA has spoken about little else when referring to the World Cup Finals, and for that reason “if you were a casual sports fan, you might think that this is the World Cup Final”.

In the run-up to the first game for each team in Group C (where Slovenia meet Algeria on Sunday), it seems the USA is concentrated, humble and focused, counting on the support back home, knowing that England is superior in the FIFA ranking and adopting a low-key approach from the point of view of a nation that is growing steadily as a force in world Soccer, while England have named the group EASY (England, Algeria, Slovenia, Yanks).

While Fabio Capello has worked wonders in fine-tuning a hard-working, talented yet unimaginative, careless and at times intellectually challenged group of players, Bob Bradley has evolved his predecessor Bruce Arena’s physical approach (bordering on cruelty and criminal assault in the 2006 World Cup Finals), moulding it into a game model which is characterised by running hard, playing off the ball, accurate passing and transforming a defensive model into an attacking one with lightning counter-attacks.

If the England fans want to label the USA Soccer team as “Yanks” in 2010, maybe they had better look at the growing influence of this team in the game and realise that the USA is today a force to be reckoned with.