Portugal: The Image of Its Coach

The Portuguese national soccer side is the mirror image of its coach, Carlos Queiroz: lacking in charisma, but hard-working and with an occasional flash which raises the eyebrows. This was the result of Portugal’s last performance before Friday’s World Cup kick-off, a 3-0 win over Mozambique. 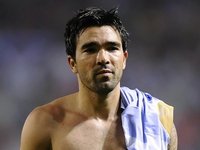 Portugal: The Image of Its Coach

Portugal finely-tuned its creative machinery, hoping that this time around the team can go one better than the semi-finals and consequent fourth place in Germany, 2006. Portugal’s naturalised Brazilian backbone constituted by Bruno Alves (Brazilian father) in defence, Pepe and Deco in midfield and Liedson up front, playing alongside a talented group of players including Simão Sabrosa, Cristiano Ronaldo (Best Player in the world two seasons ago), Chelsea stalwarts Ricardo Carvalho and Paulo Ferreira in a star-studded line-up representing Europe’s major leagues, hopes to provide that special mix which makes the difference.

After a lacklustre qualifying campaign, an appalling performance against Cape Verde (0-0), a more reasonable 3-1 against Cameroon, Portugal today pulled off another acceptable result against Mozambique, given the special nature of these matches before the championship where players do everything to avoid injury.

The first half proved everyone’s worst fears about the lack of imagination in this Portugal team, especially now that Manchester United’s Nani is ruled out of the competition with a shoulder injury. These 45 minutes sent flashes of a nightmare scenario of Portugal gaining two points from its first round matches, boring draws against Ivory Coast and DPR Korea and a heavy defeat to Brazil.

It is highly improbable that Carlos Queiroz managed anything more rousing than a few squeaks in the interval, but the substitution of Liedson by Hugo Almeida eventually paid off, while a hard-working midfield of Danny (left), Raul Meireles and Deco (centre) and Simão Sabrosa (right) provided the ammunition for 24 shots, 9 on target and eventually the goals came through.

Zenit St. Petersburg’s Danny scored on 52’ after a good feed by Deco. Wasting a further two opportunities, Danny made the second goal for Hugo Almeida, who added Portugal’s third on 83’.

Cristiano Ronaldo proved once again why he has not scored for Portugal for a year, putting in another disjointed performance which led nowhere.

Carlos Queiroz’s side undoubtedly has the talent and the experience to do something special. The notion remains however that the killer instinct is not there and that the team will only be galvanized into the brilliance it is capable of once it is losing heavily and in a hopeless situation.

The Portuguese national soccer side is the mirror image of its coach, Carlos Queiroz: lacking in charisma, but hard-working and with an occasional flash which raises the eyebrows. If the coaching team can nurture these flashes and form and feed a fire on a sustainable basis, Portugal could do justice to its third place in the FIFA ranking.