We present the teams in the eight groups playing in the World Cup Finals FIFA 2010 in South Africa, together with their ranking calculated by FIFA (based upon their recent games). Let us analyse who, by the book, should go through to the second phase and who their opponents will be. Brazil sets off in first place and in our scientific analysis, will be champion! 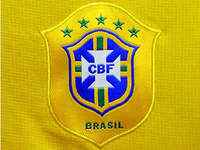 By the FIFA ranking, the following teams should pass:

By the FIFA ranking, the following teams should pass:

1B – 2A Argentina – Uruguay ARGENTINA