Ladies and Gentlemen, it has started! The international media onslaught against South Africa has begun a full two weeks ahead of the FIFA World Cup 2010. Britain’s Daily Mail leads with a story about how the Columbian national team was robbed ahead of the World Cup, while SKY News is poking around looking for dirt. 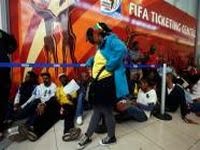 It has started. Sickeningly predictably, it is bang on cue two weeks before the World Cup kicks off, Africa’s first. They just could not let an African nation host a World Championship, in a spirit of friendship, with a climate of competence and in an ambience of goodwill.

As usual, the howling barbarian cries and screams come from the British media, a cesspool of mediocre tabloid jingoistic gung-ho. Today it is not Spanking Sarah stories, nor the gay MP who rented out rooms in his boyfriend’s apartment, neither indeed is it Sarah Ferguson, the Duchess of York, sucking someone’s toes, belching into a wine-glass or selling access to her ex-hubby.

Today, the Daily Mail leads with “Columbian football team robbed in South Africa two weeks ahead of the World Cup”. Wow! Dangerous place, eh? That headline would send shudders of apprehension through those who read it, and that is why it was written. “They” have already decided that South Africa 2010 is going to be a no-go.

Needless to say, it is a gross exaggeration of the worst kind. Firstly, the Columbian national soccer team has not even qualified for the World Cup and is in the country playing a series of friendly games. Secondly, the team was not robbed at gunpoint. What happened was that a couple of chambermaids at the hotel where they were staying in Johannesburg decided to take some 2.000 USD in cash from a few suitcases.

The suspects have been arrested and are being held in prison. End of story. As if that was not enough, there is SKY “Hey! You guys! Looking for revenge for 9/11?” News already in situ looking for dirt. This time not in Iraq but in South Africa, showing images claiming that the ticket distribution is disorganized.

Those of us who know something about what really happens in the real world out there, and those few of us who work for a media which is not controlled and paid, have for over two years now received constant messages from the organizers of the FIFA World Cup in South Africa entitled “The Good News”. They obviously saw it coming.

Those of us who have followed such events for decades know very will that FIFA has its agents on the ground and controls each and every aspect of the organization of the games. Local hiccups happen. Period.

It is by now patently obvious that the international media has decided that South Africa 2010 will be a disaster area, that all the fans and players will be robbed or killed, that South Africa is too dangerous for the Wives and Girlfriends of the players (South Africa must be so upset about that) and that the whole event will be dismal, disorganised and dangerous. Because it is in Africa and from Africa you get gloom and doom stories.

Where has the Good News coming out of South Africa for the last two years been displayed?

We heard of the temporary glitch in the issuing of tickets today, but now hear nothing about the entire problem having been a temporary computer crash which has now been resolved. We read about insecurity but then where is the reference to the comments by the German security expert Frank Hoffman, Acting Chairman of the Parliamentary Committee on Home Affairs in Berlin: “We are very impressed by the professionalism of the security forces, especially at the leadership level, as well as by the preparations for the World Cup in general”?

These comments you will not read elsewhere, because we are speaking about Africa.