CSKA Moskva won their third match out of four in the Russian Premier League, thrashing Alania away by three goals to one and moving up to second place with ten points, one behind the leaders PFC Spartak Nalchik and with a game in hand. 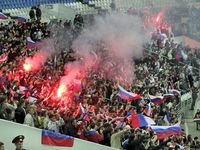 Spartak Nalchik, from the city of Nalchik in Southern Russia had won their match against Rostov by 5 goals to 2, while Zenit Saint Petersburg move up to equal second place with CSKA, also on ten points and with a game in hand after beating Lokomotiv Moskva in St. Petersburg. Lokomotiv and CSKA clash next week in the Moscow derby at CSKA’s Luzhniki Stadium.

Krylya Sovetov beat Saturn by 2-1 while Spartak Moskva got their second win of the season beating Terek Grozny in Moscow also by 2-1. New team Anzhi Makhachkala continued their surprisingly good start to the season with a 4-2 win away at bottom placed club Sibir Novosibirsk with one point from five games.

In the other matches, Rostov defeated Amkar Perm 2-1 and Dinamo Moskva drew with Tom 0-0 while the champions of the last two years, Rubin Kazan, got their second 0-0 draw, this time against Saturn.

Classification after 5 games (unless stated)