Winter Olympics 2010 To Become Worst Ever for Team Russia

Day six of Winter Olympics in Vancouver has not brought any joy to Russia. Skater Evgeni Plushenko won silver giving way to USA's Evan Lysacek. He pulled the Russian Olympic team up to 11th place, but the gap with the leader - the USA - is enormous. 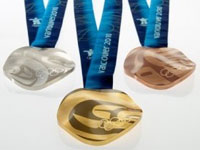 Winter Olympics 2010 To Become Worst Ever for Team Russia

Many specialists believe that Winter Olympics 2010 may become the worst Olympics in the history of team Russia. For the country that has the most amount of snow on the planet, the results are at the very least depressing, reports Trud newspaper.

During the last and not very successful for Russia Olympic Games in Turin, the country was number four in overall medal standing with eight gold medals. Glancing at the schedule of the rest of the competition, we can see that things do not look promising for Russia. While competing for gold in Vancouver, Russia pinned great hopes on its hockey team, Evgeni Plushenko, and biathletes. Chances of winning anything else are pretty slim.

The greatest expectations were of the Russian biathletes, but after the sprinter races it was obvious that many of them were far from their ideal shape.

The brightest example is the performance of Maxim Chudov, captain of team Russia, named “Russian Rocket” by his fans. While sprinting, the Rocket obviously went off course and was not able to get even into the top 60. This is considering it was the most important competition in his career.

Officials are yet to investigate the reasons of the Russian team failure, and many athletes and sports public figures are already trying to answer tough questions. The main coach of team Russia in ski races Yuri Charkovsky confessed that he did not expect such poor performance from his team.

“We never even thought about failure, and it is such a shame that both male and female teams have failed. We had high hopes for performance of Irina Khazova and Natalya Korosteleva, but they did not even compete for top places. Among men, Alexander Legkov was to show high performance, but he only finished 15th. As of now, our guys performed worse than they were capable of,” Charkovsky complained.

Mikhail Prokhorov, the President of the Biathlon Union of Russia, is not worried yet: “The weather has largely affected the sprinting results, but I have to admit that in the last round Russian athletes looked very weak. But we have competition for eight sets of medals ahead of us and we’ll have to do everything we can to win as many of them as we can. At any rate, the results of the Olympics will be obvious when the Games are over. I would not like to admit that they were unsatisfactory.”

Irina Rodnina, a three-time Olympic champion, was disappointed with the performance of the Russian skating team. “Kavaguti and Smirnov had all chances to perform better, but they could not handle their anxiety. The ability to handle yourself in stressful situations is a sign of skill. They did have chances, but you have to know how to use them,” she said.

Russian Olympic luge veteran Albert Demchenko was a step away from the victory podium. The experienced athlete did not blame anyone in his failure, but spoke about issues in his sport.

“Of course, shortened track after the tragedy with a Georgian athlete was not in my favor, but this was not the reason for my failure. There are no overpasses in Russia available for training . There are no decent tracks either . I came here to win a medal, but it was not easy under the circumstances. I hope that things will change after the Olympics .”

Vitaly Mutko, Russia’s Minister of Sports, is asking not to make premature conclusions. "As of now, Russia has four medals with only one gold, but we have to wait till the end of the competition before we make any conclusions. Let’s support our athletes; they are very concerned right now. Of course, there are obvious problems in many sports, but we cannot change anything at the moment."