A luger from Georgia died today (Friday) after a high speed crash on the world's fastest track. Nodar Kumaritashvili lost control of his sled during training, went over the track wall and struck an unpadded steel pole near the finish line at Whistler Sliding Center. The incident happened 48 seconds into his run, near the end of the track. According to the speed clock visible on a broadcast feed, he was going 143.3 kilometers per hour, or 88 miles an hour. 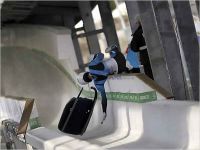 His empty sled was seen on the track after the accident His body went airborne and cleared the ice-coated concrete wall along the left side of the sliding surface. It appeared his helmet visor skidded down the ice.

Emergency rescue workers were at Kumaritashvili's side within seconds. Chest compressions and mouth-to-mouth resuscitation started less than one minute after the crash, and he was quickly airlifted to a trauma center in Whistler. He had blood pouring from a head wound after trackside emergency treatment, but doctors could not revive him and were unable to save the life of the 21 year old. He was pronounced dead at the hospital.

Kumaritashvili had crashed earlier during training for the Vancouver Games. He also failed to finish his second of six practice runs. In the runs he did finish, his average speed was about 88 mph - significantly less than the speed of the top sliders. Kumaritashvili competed in five World Cup races this season, finishing 44th in the world standings. He was one of eight Olympic athletes representing Georgia, whose team includes one other luger, Levan Gureshidze.

Access to the crash area was closed within about 30 minutes while saddened onlookers awaited word on the condition of Kumaritashvili. Several other lugers had crashed during the Friday training session, as speeds reached over 90 miles per hour.

The men's luge competition is to begin Saturday. Kumaritashvili is the fourth competitor to die at the Winter Games and the first since 1992 It's unclear if the schedule will change. The death raised safety concerns among competitors. IOC president Jacques Rogge said the death hours before the opening ceremony "clearly casts a shadow over these games."