Guus Hiddink, the chief coach of Russia’s national soccer team, declares he is satisfied with the draw which pits Russia against the Republic of Ireland, Slovakia, FYR Macedonia, Armenia and Andorra in qualifying Group B for the 2012 UEFA Cup in Poland/Ukraine. 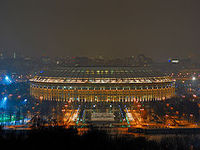 In Warsaw for the draw, Guus Hiddink declared that being in Pot 1, Russia is “supposed to be the favourite” but remembered the team’s failure to qualify for the FIFA World Cup 2010 in South Africa. In declarations to UEFA.com he stated “My eyes aren’t closed to the fact that we recently failed to qualify for the World Cup, which means we can’t say we are automatic favourites to win this group”.

Nevertheless, he stated that “we have no other goal than to finish first”. For Hiddink, the main teams to watch are the Republic of Ireland and Slovakia, a team whose manager Vladimir Weiss has managed to take to the FIFA 2010 and one which will gain greatly from the experience.

As for the Republic of Ireland, the Dutch coach retorted “Look at what the Republic did in qualifying for the World Cup” (beaten by France in the play-off in a game in which the winning goal resulted from Thierry Henri’s blatant handball). However globally he says “I am satisfied with the draw”. As well he should be. Russia occupies 13 th place in the FIFA World Ranking, while Slovakia is ranked at 36 and the Republic of Ireland at 37. FYR Macedonia is down at 64, Armenia at 102 and Andorra, one hundred places below at 202.

The nine first-placed teams qualify along with the hosts, Poland and Ukraine and the best second classified. The other eight teams in second place will enter a play-off and four will go through (16 in total).