Cees van Nieuwenhuizen, the agent of the Russian national soccer coach, confirmed today that Guus Hiddink will activate the two-year extension of his contract to run from 2010 to 2012. Russian soccer fans hope he will be able to build on the UEFA semi-finals in 2008, after failing to qualify for the FIFA World Cup 2010. 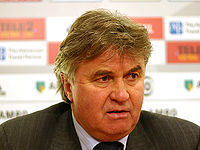 Cees van Nieuwenhuizen declared on Friday in an interview with Britain’s Daily Telegraph, that Guss Hiddink, 63, “is happy in the Russian national team” and intends to prolong his contract until 2012, despite his side’s pitiful performance against Slovenia over two games in the knock-out qualifying phase for South Africa 2010.