Pavel Bure, a hockey legend, became a family man on October 10 as he wedded a 23-year-old model Alina Khasanova. The 38-year-old "Russian Rocket" organized a wedding party exclusively for his guests in Moscow: the hockey player and the beauty were officially married on October 10 2008 in Miami. 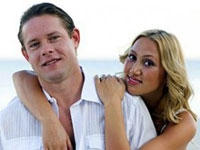 Over 300 guests attended the party, which Bure held at a Moscow restaurant.

“We saw Alina for the first time 18 months ago in America. Pavel would introduce her as his future wife,” some of Bure’s friends said.

Many sports and showbiz stars, as well as Russia’s prominent political figures arrived to congratulate the renowned Russian player. Vladimir Zhirinovsky, a notorious leader of the Russian Liberal and Democratic Party, was one of the first guests to arrive. Gennady Zyuganov, the head of the Communist Party, arrived later too. The two politicians were seated at different tables to avoid clashes.

Alina and Pavel visited the restaurant a month before the party to choose the menu and the show program for their guests. The tables were presumably served with dishes of the cuisine of Tatarstan – the republic where Pavel’s wife comes from.