Dinara Safina wasted three match points and lost. Maria Sharapova was the latest victim of the US sensation player Melanie Oudin. In the men’s tennis tournament, Davydenko represents Russian tennis while he has three compatriots in the women’s. 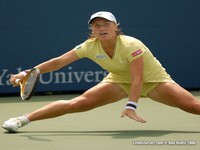 Nikolai Davydenko, Nadezhda Petrova, Vera Zvonaryova and Svetlana Kuznetsova continue to the quarter-finals of the US Open after two big names exited: the world number one Dinara Safina managed to waste three match points, losing with the Czech Petra Kvitova 4-6, 6-2, 6-7 (5). She was winning 6-5 in the third set. Sharapova lost with Oudin.