Why Arshavin's Team Mates Call Him The Meerkat?

Arsenal’s forward Andrey Arshavin is reportedly being nicknamed “The Meerkat” by his team-mates as they compare him with a well-known animal in a television ad. 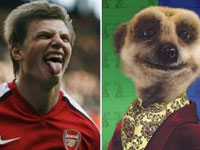 Why Arshavin's Team Mates Call Him The Meerkat?

A closer look at the famous Russian football star shows a lot of similarities indeed.

1. The athletic constitution helps meerkats survive in the natural world. Arshavin’s athletic build helps him rush across the field all through the match, trying to score a goal.

2. The meerkats’ coloration is very similar to Arshavin’s hair color. Moreover, his face bears some resemblance to meerkats’ muzzle.

3. Meerkats unite into clans, while footballers are also teaming up. Besides, the clans struggle for territory, just like footballers fight to score a goal.

4. Meerkats like to embrace and play with each other. Football players do the same, celebrating the scored goals.

5. Meerkats are prone to changing their positions. Football fans remember Andrey trying to leave “Zenith” many times. He was invited to “Real”, “Barcelona”, “Milan”, “Tottenham”, “Chelsea” and many others.

8. Meerkats are known to stand vertically on hinder paws with their front paws resting on stomach. It reminds of the footballers’ wall during a direct free kick.

9. Meerkats can be easily tamed due to their high intellect. Arshavin very quickly demonstrated team-work with his team-mates from “Arsenal”, though reporters were predicting a long period of “acclimatization.”

10. Meerkats dislike cold weather. Although Arshavin had lived in St. Petersburg all his life, he could not get used to chilly and rainy weather in London for a long time.

Former USSR
Being too preoccupied with Ukraine, Russia may loose Tajikistan
21:10
Being too preoccupied with Ukraine, Russia may loose Tajikistan
19:21
Ukraine names the cost of country's restoration and demands to take money from Russia
19:04
Russian MP suggests renaming Kaliningrad the way new reality dictates
18:39
Ukrainian commander: 'It's a matter of time when Russian flag will be raised in Kyiv'
17:57
German PzH 2000 howitzers captured by Russian military in Ukraine
17:46
Russian ice hockey player accused of dodging army service as he wants to sign up NHL
17:13
Czech general tells bad news to Zelensky
17:03
Protests in Uzbekistan: Authorities backpedal as 18 people killed
16:38
Zelensky's adviser says the surrender of Lysichansk is Ukraine's successful operation
16:05
Anonymous insider explains why Russia tolerates shelling of its cities by Ukraine
РусскийDeutschFrançaisPortuguese