Sir Bobby Robson: The greatest ambassador of football leaves us

The World of Football mourns as its greatest ambassador, Sir Bobby Robson, leaves the sport he loved and excelled in so much poorer. The Gentleman of Football may have passed on but his victories and more than that, the tremendous dignity which he imparted to the game, will live on in the annals of its history for decades to come, if not forever. Pravda.Ru presents a career review and an insight into the man who corresponded with Timothy Bancroft-Hinchey on and off for over a decade. 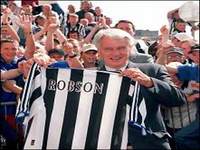 Sir Bobby Robson: The greatest ambassador of football leaves us

Sir Robert (“Bobby”) Robson´s great victories and success in the game he felt an unequalled passion for (141 goals in 627 appearances), and in which he excelled, are a secret to nobody and his record is second to none in his generation (after all, that is all we have to measure ourselves against). After a playing career as wing-half and inside forward spanning two decades at Fulham, West Bromwich Albion (for a club record fee) and Vancouver Royals, including 20 England caps (4 goals), Bobby Robson left his indelible mark in football management at club level.

After an unsuccessful first managerial position at Fulham in 1968 (where he inherited a club in a dire position and could not avoid relegation) he moved to Ipswich Town the following year and placed this club firmly on the map of European football (4th place in Division One, Texaco Cup 1972/3, FA Cup 1977/8, UEFA Cup 1981. He transformed the club into one of England’s top sides over a decade and Ipswich were twice league runners-up). Robson also relied heavily on the club’s youth development policy, bringing in only 14 players from outside in 13 years, a policy which he tried to implement in all the clubs he managed, trying to secure their future after he left.

In 1982, Bobby Robson was appointed England manager. The first thing he did was to appoint Don Howe, his team-mate at West Bromwich Albion, as head coach (he would always stress the contribution of others) and together they took England through 28 qualifying matches with one defeat but this was enough to deny England a presence in the 1984 UEFA Championship. However, he led England to the quarter-finals of the FIFA World Cup in Mexico in 1986, where his side was denied a place in the semis due to Maradona’s Hand of God goal and his goal of the century shortly afterwards. “It was the hand of a rascal” said Robson, who later asked whether they were playing football or 11-a-side handball.

In the following World Cup in Italy, 1990, the campaign went as far as the semi-finals (defeat to West Germany on penalties) which was disappointing but was the nearest anyone has come to giving England what it has always dreamed about since 1966, a repeat of World Cup success - and was the highest point to which any manager has taken the national team in nearly half a century.

In his career back in club management outside the UK, Bobby Robson showed inspiration as much in handling different egos in a changing game as in mastering the peculiarities of the different championships in which he participated. (Dutch Championship with PSV Eindhoven in 1990/1 and 1991/2; Portuguese League 3rd place with Sporting Clube de Portugal, 1992 and sacked in 1993 with Sporting sitting on top of the Portuguese First Division, while at this club he recognised the qualities of his translator Jose Mourinho, brought him into football management and acted as his mentor at Sporting, FC Porto and FC Barcelona; FC Porto (with Mourinho as assistant manager) Portuguese Cup 1994; Portuguese League title 1994/5, 1995/6; FC Barcelona Spanish Cup, Super Cup, UEFA Cup 1996/7; European Manager of the Year 1996/7; in 1998/9 he led PSV to the Champions League; back in the UK he saved Newcastle United (his boyhood heroes) from relegation 1999/2000 taking them to 4th place in 2001/2, 3rd in 2002/3 and a place in the Champions League, 5th in 2003/4). He ended his career back in international football as Advisor to the Republic of Ireland national team from 2005 to 2007.

Few have highlighted that all of this was achieved while Bobby Robson fought an 18-year battle against cancer, defeating bowel cancer, a melanoma and a brain tumour, finally to succumb to lung cancer. In 2008 he launched the Sir Bobby Robson Foundation to raise money for cancer research, raising over a million GBP by the end of the year and he performed fund-raising activities to help others beat this disease until shortly before his death, funding several projects in a number of hospitals and setting up the Sir Bobby Robson Cancer Trials Research Centre in the Freeman Hospital, Newcastle.

All of the above can he found on the Internet. However what cannot be found is the legacy he left me as a person and as a mentor, teaching me a work ethic and imparting some of his tremendous dignity to me which I have tried to bring into my journalism, where I refuse to engage in “personal interest” stories at the expense of others’ privacy and dignity. After meeting Bobby Robson in my home town and re-encountering him in Lisbon,we began a long relationship first in person and then by correspondence.

A hugely private man, our conversation centred around football and nothing else because that was the capacity he understood as being the one on which our relationship was based. Nothing about family, nothing about politics. Football.

And it was clear that he lived the game with a passion and a sense of adventure and a will to work and learn which he found fascinating. Despite the many unfair kicks he took along the way he always said “Nobody is bigger than the sport” and he accepted his lot as being “part of the game”. Even when he was the victim of the act which must be classified as the stupidest action in the history of football, his sacking by President Cintra of Sporting Clube de Portugal (Lisbon) when SCP was on top of the league in a year which he confided “We would have won the Championship and gone on to make Sporting one of Europe’s greats”, Bobby Robson just shrugged his shoulders and said “So be it, what can I do?”

He adored his years at FC Porto and greatly respected Porto’s visionary President, Pinto da Costa, who has enjoyed more success at club level than any other Club President in the history of the game and he greatly respected the growing Jose Mourinho, who he predicted would be the best manager in the game in a “new generation of scientific managers, which I understand but which is very much part of the nextgeneration”. For Bobby Robson, Pinto da Costa was an “intelligent man, a nice man and an excellent manager of men who knows how to bring success to his club and who like me, lives his life more for bringing happiness to others than any wish to bask in glory for himself. A very special person”.

I am not going to reveal here the wealth of snippets of conversation I gained from Sir Bobby Robson over the years, for one reason: what he said to me was always off the record and I promised him that it would always remain so. And so it will. What I will say is that he learned throughout his life to work hard, to respect others, to live a life of humility and dedicated service, concentrating on bringing joy to communities, and feeling this in his veins despite a heroic battle against cancer for nearly two decades and despite all of this, he even had a good word to say about the most despicable and vile of the worst kind of sports journalists: “They’re only doing their job” – even those at FC Barcelona where he lamented “They have their team picked before you choose it, and if you choose the same team as them they change theirs and then stick their knife into your back if something goes wrong. Sometimes it is exasperating because you are fighting a losing battle from the minute you wake up till the minute you fall asleep but all I can do is to keep working. Even when you’re confronted by the worst sorts of person, you still have your dignity and if you remain true to that, you are true to yourself and therefore you win”.

Farewell, Sir Bobby, but never goodbye. You will live inside our hearts and souls forever. And thank you.