Alexei Cherepanov, a hockey player of Omsk Avangard, who died Monday of heart failure, was buried in his native city of Omsk on October 15, Itar-Tass reports. The general director of Avangard, Anatoly Bardin, rebutted the information voiced by the minister for healthcare of the Moscow region, who said that the athlete was “a totally sick individual.” The team intends to sue the official. 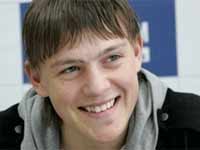 The official website of Avangard hockey club says that the viewing for Alexei Cherepanov took place October 15 at Arena Omsk from 10:00 till 13:00 local time. The casket was placed in the middle of the skating rink, on which Alexei was playing and training with his teammates. The funeral service started at 14:00. Alexei was buried on Staro-Sevenroye memorial graveyard in Omsk.

The 19-year-old forward Alexei Cherepanov collapsed during a game in the town of Chekhov, the Moscow region. The tragedy occurred during the 18th minute of the third and final period of the Continental Hockey League regular championship Vityaz (Chekhov) – Avangard (Omsk). Alexei collided with a player of his own team, Jaromir Jarg, went to the bench and collapsed there.

The player was urgently hospitalized to the intensive care unit of one of the hospitals, where he died despite life-saving efforts of the doctors. Cherepanov reportedly died of the ischemic heart disease.

The investigation committee of the Moscow region will investigate the death of the hockey player. Spokesmen for the committee said that they wanted to know why the player had been allowed to play.

Representatives of the Avangard hockey club deny the information about the striker’s serious illness. “Alexei Cherepanov was an absolutely health man. He did not complain of his heart. Avangard hockey players undergo medical examinations on a regular basis,” the press service of the club said.

“Alexei Cherepanov was fine before the game. He did not have any complaints,” a spokesman for the club said.

The director of the club, Anatoly Bardin, set out his indignation with the remarks from the Healthcare Minister of the Moscow region, Vladimir Semyonov, who said that Cherepanov was sick during the game. “I am not leaving this like that, we will sue the official,” Sports.ru quoted the director as saying.

The director of the club was concerned with the following remarks voiced by Vladimir Semyonov: “A totally sick individual was allowed for the game. The hockey player died on the bench before the ambulance arrived. Alexei Cherepanov’s heart was enlarged three times, and his spleen was enlarged five times in comparison with the norm. The ER station is only three-minute drive away from the sports complex, the doctors arrived quickly, but the athlete was already dead.”

The death of the 19-yeasr-old player raises many questions, to which both fans and the general public would like to know the answers, the chairman of the State Duma Committee for Legislation, Pavel Krasheninnikov said (Krasheninnikov is the vice president of Metallurg hockey team).

“The first question is – was there ambulance at the rink? It is obvious that medics should be present at a public event. Anything may happen to either fans or players. The second question is connected with rumors about the inappropriate equipment of the ambulance, which eventually resulted in the loss of precious minutes when the young man could be saved,” Krasheninnikov said.

A doctor of medical sciences, one of Russia’s best cardiologists, Sergei Kozlov, said that Cherepanov’s illness could be undetectable.

“In the case with Cherepanov, a plaque might have been formed in the coronary artery and stayed there for a long time. No examinations can detect such a plaque. The plaque can burst at any moment. There are incidents when it leads to instant death,” the doctor said in an interview with the Trud newspaper.

Alexei Cherepanov was one of the most promising athletes among young Russian hockey players. His talent was often compared to Alexander Ovechkin, the best NHL player of the past season. New York Rangers selected Cherepanov in 2007, but he continued to play for Avangard in Russia at his own will.

It was a good season for the leader of the Russian youth squad. Cherepanov became the only player of the youth squad, whom national hockey team head coach Vyacheslav Bykov included in the extended list of candidates for the November stage of the European tournament.

Cherepanov appeared in 14 games with Avangard Omsk this season, registering seven goals and five assists for 12 points. He ranked second on the team in goals and fourth in points. He also ranked third on the team with a 24.1 per cent shooting percentage.

The 6-1, 187-pounder appeared in 106 career Russian Super League/KHL matches with Avangard Omsk, collecting 40 goals and 29 assists for 69 points, along with 61 penalty minutes. Last season, Cherepanov established a career-high in assists (13) while finishing fourth on the club in points (28). In 2006-07, he set the RSL record for most goals by a rookie (18), eclipsing Pavel Bure's mark (17) set in 1988-89 with the Red Army (CSKA Moscow). With 29 points in his first season with Omsk, Cherepanov recorded more points than Pittsburgh's Evgeni Malkin, Washington's Alexander Ovechkin and Atlanta's Ilya Kovalchuk each tallied in their first RSL season.

Internationally, Cherepanov represented Russia in several elite tournaments. Most recently, he helped lead Russia to a bronze medal in the 2008 world junior championship, tallying three goals and three assists for six points and a plus-3 rating in six games.

Cherepanov earned top forward honours and was selected to the all-tournament team at the 2007 world junior championship, where he led all players in scoring with eight points (five goals and three assists) in six games and helped Team Russia capture a silver medal.