A young mother of the abnormal baby (the woman was 19 when she delivered the baby) had no idea that her baby would have such terrible abnormalities. Indeed, ultrasound examinations showed that the baby was growing normally. The mother was terrified when doctors showed her a baby with a horn the size of a little finger located right on the back of the head and an underdeveloped foot. The newborn baby had only nine fingers on her hands and feet. The 19-year-old mother immediately rejected the daughter as the baby was looking like a little devil. The father of the baby, an aged well-off businessman, had been looking forward for the childbirth, and burst into tears when he was told the sad truth about the daughter’s health. The parents broke up soon afterwards too. 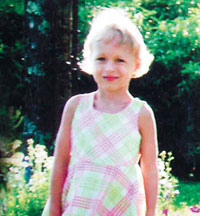 The baby was taken to an orphanage where doctors learnt about the family’s tragedy and decided to endow the little girl with much love and caress.

Nurses of the orphanage said that the girl was the purest soul of all babies who ever lived there. The baby was named Dasha. She was the kindest and smartest baby of the orphanage. It was physically hard for the little girl to eat neatly as her hands lacked fingers and the girl got awfully disappointed if some food still dropped on her clothing. The doctors working at the orphanage said they all loved Dasha for her kindness and persistence. It was clear from the very beginning that the underdeveloped foot would not let the girl walk. But Dasha wanted to walk and she made attempts to walk independently even though the walking rubbed the foot and made it bleed. An amputation was required to make the girl’s foot good for normal walking. So, doctors amputated Dasha’s leg up to the knee and made a prosthetic leg for her. The terrible horn on the head was removed too.

The surgery radically changed the girl’s life. The prosthetic leg let her start walking and running. Dasha was a smart girl; she knew many rhymes and fairytales by heart and always helped nurses with smaller babies. The girl was always waiting for her mother to come and take her home which is so typical of abandoned babies living in orphanages.

A teacher who worked at the orphanage for twenty years became an adoptive mother for Dasha and they started living together. One day, an American family saw Dasha’s photo and decided to adopt the girl.

Dasha got wonderfully acclimatized in the USA. Her American parents regularly send letters to the adoptive mother staying in Russia and to the doctors and nurses of the orphanage. The parents say that Dasha is a wonderful baby; her soul is pure and she can love sincerely, the newspaper Life (Zhizn) wrote.

Dasha’s new parents are country style musicians. When the couple came to the orphanage for the first time, the woman played the piano. That was a melody she composed herself. Suddenly, Dasha who was never taught to play the instrument, came up to the instrument and repeated a part of the melody. That was an astonishing surprise for those who knew Dasha well!

Adoptive mother Vera is always looking forward to new letters from the USA about her Dasha. The American parents write that they are happy and that the girl is no longer shy and openly shows her love to her new parents. Even though Dasha left Russia many months ago she still remembers and loves the woman who was the first to give her love and family.