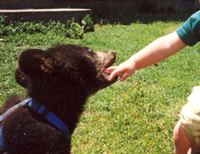 A bear bit off a hand of a five-year-old girl who was spending a week-end at a recreation center in the settlement of Vyatskoye in Russia’s Khabarovsk Region, a spokesperson for the Khabarovsk Regional police department told RIA Novosti.

The tragedy occurred last weekend when the child wanted to feed the caged bear and extended her hand holding some food to the cage.

Now the girl is at a regional children’s hospital. The bear was shot soon after the tragedy. The girl was placed to a resuscitation ward of the hospital after her arm was amputated up to the shoulder joint. The girl has come to consciousness but her condition is still serious and requires medical supervision, doctors of the hospital say.