Nikolai Valuev hates being called Beast from the East

“My mom and dad named me Nikolai. My family name is Valuev. All the rest is bull,” Nikolai says

Nikolai Valuev, the first Russian WBA heavyweight champion speaks about the reception he had in his hometown of Saint Petersburg, his private life and his plans. 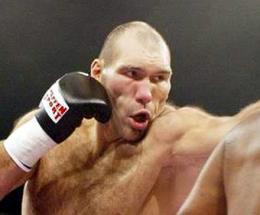 “My biggest dream after winning a title fight against John Ruiz was a nice sleep-in. But my dream never came true,” admitted Valuev. “Giving dozens of interviews every day really wears me. But this kind of response was pretty much expected. Russia has never had a world heavyweight champion. I felt touched when I saw several hundreds of people welcoming me at the airport of St. Petersburg. I get invited by various TV stations, I had a meeting with the Mayor of St.Petersburg. My victory stirred plenty of enthusiasm in Russia.”

These days it is difficult to visit public places without drawing attention, said Valuev. One day after his arrival in St. Petersburg, he gave away about a hundred signed photos while taking a walk with his wife Galina.

Valuev agreed to the harsh criticisms he got after winning the tough fight against Ruiz. “That fight did not look beautiful,” said he. “Most of the criticism leveled at me was pretty justifiable. I found it very hard getting used to Ruiz's style. He was delivering blows with his left arm all the time while ducking his head down onto my chest. I accept any kind of constructive criticism of my performance. In particular, I agree that I should box better and use my right arm more frequently. I will work on that.”

Valuev said that his next fight is scheduled for April 1, in Germany. The fight is likely to take place in some Berlin venue. Speaking of a boxer he would like to fight most, Valuev mentioned Vladimir Klitschko. “A fight would cause a great deal of interest both in Germany and Russia. The audience would see who the best boxer of Eastern Europe is. I would like to challenge Vladimir to a fight and eyeball him in the boxing ring,” said the Russian giant.

Nikolai Valuev said earlier that he did not like being dubbed 'The Beast from the East' by his fans. Other combat names included 'Power Tower' and 'The World's Eighth Wonder.' Don King was even going to nickname him 'King Kong' for the promotion campaign in the U.S.

“My mom and dad named me Nikolai. My family name is Valuev. All the rest is bull,” said the world's heavyweight champion.