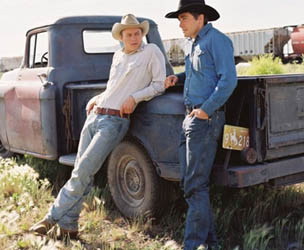 Based on a short story by novelist Annie Proulx, Brokeback is the wrenching story of two macho cowboys who, despite themselves, begin a romance in 1963 and pursue it during stolen moments over the next two decades. The other nominees for best drama were The Constant Gardener, Good Night, and Good Luck, A History of Violence and Match Point.

The Globes are awarded by the relatively small Hollywood Foreign Press Association, which has about 80 members, compared with the 5,800 film professionals eligible to vote for the Oscars.

Hollywood's first major show of the awards season, the Golden Globes is viewed as a key predictor of Oscar success. The Academy voters have until Saturday to pick their nominees for the Oscars, which will be presented on March 5.

However, distributors are quite worried about "Brokeback Mountain." They say that many people may not be interested in gay problems. They fear that the movie may not do well in the box office.

For television viewers who have grown accustomed to stiff, dull awards shows, the Globes delivered some entertainment with its trophies. Whether the alcohol served to audience members as they waited helped, only the bartenders know for sure, according cantonrep.com.

The best dramatic actor award went to Philip Seymour Hoffman, who won it for Capote. Joaquin Phoenix and Reese Witherspoon were both honoured for their performances in the musical Walk the Line.

“Walk the Line," though it offers as many dramatic moments as tuneful ones in telling the tale of Cash and June Carter, took the prize for best motion picture - musical or comedy. Accepting the award, producer Cathy Konrad credited her husband, James Mangold, the film's director, for sustaining the "decadelong journey it took us to make this movie." Her fellow producer James Keach offered a special shout out to Cash and Carter, who died within months of each other in 2003. "I'm so sad that John and June didn't get to see this movie that they wanted so much to be made," he said.

Other nominees were Maria Bello for A History of Violence, Gwyneth Paltrow for Proof, Charlize Theron for North Country and Zhang Ziyi for Memoirs of a Geisha.

"I would like to salute the men and women who brave ostracism, alienation and a life lived on the margins to become who they really are," Huffman said.

Monday was a triumphant night for films dealing with homosexuality and transsexuality, with acting honors going to Felicity Huffman, who played a man preparing for sex-change surgery in "Transamerica" and Philip Seymour Hoffman, who starred as gay author Truman Capote in "Capote,” says seattlepi.nwsource.com.

I was given the best part of my life, basically, and I know that," an emotional Hoffman, a Broadway star and a favourite of film critics for years, said in his acceptance speech.

Recent Golden Globes ceremonies showcased Australia's leading female stars such as Nicole Kidman, Cate Blanchett, Naomi Watts and Rachel Griffiths, but this year they were all not present. Eric Bana and Julian McMahon were not nominated, but were prominent on the red carpet.