The news about a new aircraft for the Ukrainian president appeared in the Ukrainian media amid the reports on the natural gas price dispute between Ukraine and Russia. The plane is reportedly being polished up at Kharkov Aviation Plant. Neither the size nor technical specifications of the plane are worth reporting about. It is the plane's interior, garish and ostentatious, which can astonish the onlooker. The decoration includes articles made of rare species of wood, amber inlays, and accessories coated with 18-carat gold. 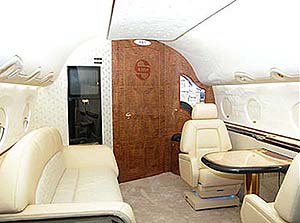 According to journalists, gilded handles and lamps were manufactured at the personal request of Ekaterina Chumachenko, the president's wife. Mrs. Chumachenko also requested that the passenger section be decorated in light colors to enhance easy and joyful feelings. The president's cabin has two large armchairs made of white leather, an elegant coffee table and a bar. A study is located in another block. There is a special room for accompanying personnel; it has the same wide and soft armchairs like those in the president's cabin. For patriotic reasons, the president's plane was modeled on the Ukranian passenger aircraft An-74TK300. The plane is designed to carry 53 passengers to a distance of 5,100 kilometers. Maximum cruise speed is 725 km/h, altitude is from 10.6 km to 11.1 km. The plane is manned by a crew of two. Estimated cost of the executive version of an aircraft is $12 million.

The high cost of the aircraft stirred up quite a fuss in the Ukrainian society. The presidential administration denied all reports relating to the new aircraft for Mr. Yushchenko. According to the presidential chief of staff Igor Tarasyuk, the president needs a new plane but the purchase of it has been postponed until 2007 the earliest. Following the publication of reports and photographs of the plane, the authorities were forced to admit the existence of an executive jet currently polished up at the Kharkov Aviation Plant. However, the administration insisted that Mr. Yushchenko had nothing to do with the plane, which has been originally ordered by Libya.