A man of gigantic stature became Russia's first boxer, who obtained the champion title in the most prestigious weight category

Russian heavyweight boxer Nikolai Valuev has become the WBA world champion. The 7ft, 23st 1lb Russian, who edged home on the scorecards to wrest the WBA heavyweight title from John Ruiz on Saturday in Berlin, shattered the previous records set by Italian Primo Carnera. Valuev's victory in the fight with John Ruiz on Saturday won him the title of the tallest and the heaviest world champion in boxing history. 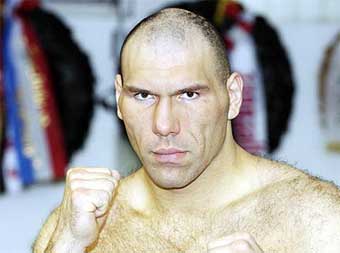 Ruiz attacked Valuev from the very first seconds of the fight. Nikolai was acting very primitively on the ring, lost the fourth round, but became more active in his fighting strategy later. It could be seen in the middle of the fight that Valuev was losing the tournament: he was moving too slow, missing Ruiz's hits.

When the fight ended, Valuev became Russia's first boxer, who obtained the champion title in the most prestigious weight category in boxing.

”This is the great day that I have been waiting for for many years,” the Russian man of gigantic stature, Nikolai Valuev, told reporters after the fight.

Valuev has recently visited Alexander Nevsky's Temple on Potsdam. Father Anatoly, who used to be a boxer too, blessed Valuev for the fight. “God helps those who help themselves,” the priest told Nikolai.

Click here to see the photogallery of the fight

Nikolai Valuev was born on 21 August 1973 in Leningrad (later renamed to St.Petersburg). He was a common boy like everyone else until the age of 13, when he started growing very fast. Thin and cumbersome, Nikolai became the object of jokes and mockery at school.

Nikolai made his first steps in sports as a basketball player. Then he started going in for track and field, and achieved impressive results in shot and discus throwing.

When a student of the Academy of Physical Culture, Valuev got acquainted with a boxing coach Oleg Shalaev. The latter praised the natural physical potential of the student and offered the young man to try himself as a boxer.

The training sessions started in the spring of 1993. Nikolai became a master of sports a year later. He joined a local team, won a Russian Championship silver medal and succeeded at Goodwill Games.

Valuev was disqualified when the federation of amateur boxing found out that he had conducted a commercial fight in Germany. Valuev lost the tile of an amateur and had to look for his place under the sun in the world of professional boxing.

When Valuev won the fight with John Ruiz, he acknowledged that it was the day when his dream came true. “I admit that I was not perfect in the tournament, but I am happy that I won,” said he.

The audience, which packed the 10,000 sports arena in Berlin on Saturday, was taking Ruiz's side during the fight. “I am used to it in my fights, when the audience takes the side of my smaller rivals. People generally have more sympathies for smaller individuals. But this is the boxing, and I will not succumb to this pressure,” the triumphant Russian giant (213 cm in height) said.

”I know that I have become the first Russian boxer, who managed to become a heavyweight champion. I also realize that it is not the point where I can stop. The most important thing for me at the moment is not to catch the star disease. I have to keep going and master my skills further on to climb another mountain,” Valuev said.

Answering the question about Mohammad Ali's arrival in Berlin, Nikolai Valuev told reporters that he would like to meet the legendary boxer in person. “I am full of respect to this great man. I wish I could meet him,” Valuev said. When the press conference was over, Valuev congratulated everyone on the forthcoming holidays: “I wish you all to have a very happy Christmas. I wish your dreams to come true like my biggest dream came true today,” RIA Novosti quoted the world champion as saying.

Valuev, 147 kilos, participated in 28 professional fights, and won 23 of them with knock-outs.