90 percent of Russians scared of HIV-positive people to death

The winner of the beauty contest for HIV-positive women works as a hairdresser. Some of her clients started wondering if the virus could transmit by hair

“First off, I love you all. I love this life. I just love it. Second, taking part in a beauty contest was not so difficult. I just sent my photograph to a magazine that launched the contest. Why not? It looked like a pretty interesting idea…” 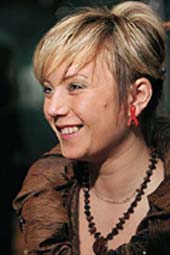 A wispy pretty girl with a trendy coiffure sits at table. She holds the spotlight amid the journalists and cameramen who pay attention as she speaks out. The girl is called Svetlana Izambayeva, she is the winner of “Miss Positive-2005." This beauty contests was held for HIV-positive girls. Perhaps she thought nothing before sending her picture to a beauty contest launched by a magazine called Shagi (Steps). She apparently did not expect to win. Yet she did. Now she is turning into a national celebrity as central TV channles spread her image far and wide. Lots of people will see her face on the screen.

“I am a hairdresser by profession, I'm used to making people look beautiful. And now I have become the winner of the beauty contest myself. This is amazing and weird. And I want to tell you one thing – HIV-positive people are people just the same. They are around us. I often hear people crying, I mean those who just leaned of their diagnosis. I remember staying in bed for six months after being diagnosed with HIV. Then I was invited to a conference in Moscow. I saw lots of HIV-positive people and they were smiling at the world. Sure thing, I was afraid and I am still afraid that people will stay away from me. When the first article about me appeared in a newspaper, I got many phone calls from some of my customers who wanted to know if I was safe enough for my job. The clients were wondering if the virus could transmit by hair? But other people just took me aside and whispered in my ear: "Tell me how you coping with it because I've got the same thing.”

Journalists are awash with information about the deadly disease at the beginning of December when people around the world commemorate the International HIV-AIDS Awareness Day. One piece of information seemed really alarming: 90 percent of Russians are afraid of socializing with the HIV-positive persons. I asked Svetlana a question at the press conference: “Were you afraid of those persons too before you learned of your diagnosis? “Certainly, I was among the 90 percent,” answered she. Svetlana said that she had never thought about the disease as a clear and present danger. She thought it could only happen to residents of some African country. “AIDS does not concern me because I pursue a healthy life style” thought she.

The issue of HIV-AIDS is not about Africa, it concerns every one of us. The authorities say that unprecedented funds should be allocated next year to combat the spread of HIV and help the HIV-positive patients. The problem is that many of the HIV-positive persons are reluctant to be registered in hospital and receive necessary treatment. Everybody has their own reasons to keep away from hospital. The fear of bad publicity is one of the main reasons. Svetlana Izambayeva managed to get rid of that fear because she believes in the kindness of the people around her.

Her stance, her readiness to look straight in the TV cameras is probably more important than hundreds of meetings and reports on the fight against the epidemic.