The whole world was watching the unique surgery to separate adult Iranian craniopagus twins Ladan and Laleh Bijani fused at the brain. The operation was performed for the first time in history in 2003. Thousands of people were praying for salvation of the sisters and for granting an independent life to each of the two girls. Experts said there were just few chances that the surgery would be a success. Still the girls wanted to be separated whatever the risk to live a normal life could be. Unfortunately, the surgery turned out to be fatal for them. But the dream of Ladan and Laleh to live separately from each other came true: doctors separated the twins when they were alive. Doctors succeeded with separation of both brains and maintained separate blood supply of them. The operation lasted longer than expected: it turned out that the brains of the 29-year-old twins were fused deeper than doctors originally thought. The two girls died as a result of heavy blood loss. 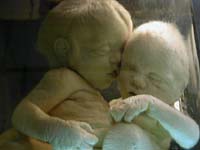 Separation of craniopagus twins – people fused at the head – still poses the highest difficulty for surgeons worldwide. Fourteen years ago, Director of Moscow's Burdenko Neurosurgery Institute Academician Alexander Konovalov performed the first surgery on craniopagus twins. Sisters Vilia and Vitalia Tamulyavichus from Lithuania were born with their fontanels fused. At that, their faces were lying in different planes: when one girl was lying with her stomach down, the other was lying on her side. Doctors with Alexander Konovalov at head successfully separated the twins when they were 11 months old. Today, the girls are 15; they are happy and sociable teenagers making good progress at school. The girls already have dates with boys. And only slightly deformed skulls of both girls may reveal they were born as craniopagus twins.

In 2002, doctors of the clinic at the University of California in Los Angeles performed an operation to separate one-year-old Siamese twins from Guatemala, Maria Teresa and Maria de Jesus Alvarez. The girls were fused at the back of both heads, a really rare case. The operation lasted for over 20 hours and was a success.

In April 2001, Singapore doctors with Dr. Keith Goh at head (the surgeon performed the separation of Ladan and Laleh Bijani) successfully performed separation of craniopagus twins Ganga and Jamuna Shrestha from Nepal. The girls' brains were partially conjoint. It was particularly important for doctors to determine to which of the girls this or that part of the brain belongs. As a result of the surgery both girls must retain essential brain parts controlling logic and speech. The separation lasted for 88 hours and became a really worldwide sensation. Thanks to the surgery the girls began independent active lives.

Experts name several reasons why Siamese twins come to the world at all. In the old times it was believed that birth of such children meant the soon end of the world. These children were as a rule destroyed and sometimes even together with their parents. But often enterprising people employed Siamese twins to make money.

In 1811, twins conjoint with a strip of skin on the level of their breasts were born in the province of Siam of Melange, now Thailand. And by the name of the province conjoint twins are since that time called “Siamese twins.” The Siam King ordered to kill brothers Eng and Chang as the boys were believed to be an evil sign, a warning of a disaster. But mother of the boys did not allow to kill her sons. She regularly rubbed the skin between the boys to make it especially elastic and allow them face each other and move freely than before. Later, the king showed much mercy towards the brothers. He let a Scottish merchant take them to North America where the unique brothers performed in the circus.

In 1929, the twins acquired the name of Bunker, bought a farm in North Caroline and started farming. At the age of 44 they married English sisters. One brother was the father of ten children and the other gave birth to nine children, all of them were absolutely healthy. Eng and Chang died at the age of 63.

Siamese sisters Rose and Josepha Blazek fused at their buttocks were born in 1878. The girls had two hearts, two sets of lungs but one stomach and one set of genital for both. Parents were shocked to see their unusual daughters and decided to starve them for several days. But the girls survived. In 1892 the sisters opened an attraction known on both sides of the Atlantic: they played the violin and the harp. At the age of 28, Rose fell in love with a German officer. The sisters quarreled with each other as they had common genitals. Later, Rose got pregnant and gave birth to a healthy boy. The sisters brought up the son together in harmony.

Sisters Daisy and Violet Hilton fused at hips were the most famous Siamese twins of the past century. The talented girls performed one of the leading roles in Tod Browning's Freaks and became incredibly popular. They had many sex partners and openly told journalists about their private life. The sisters died of flu in January 1969.

The life of Russian Siamese sisters Dasha and Masha Krivoshlyapova living in the past century was rather tragic. The girls were born with two heads, one body, three legs, with two hearts and three lungs inside. When the mother learnt her children were conjoint she went mad and was taken to a mental hospital. The father was forced to sing a death certificate of the daughters. So, the girls could depend upon each other only when they grew up. They stayed at the Soviet Academy of Sciences Pediatrics Institute within seven years under supervision of doctors. The girls had their third leg amputated and could walk on crutches. At the institute, the girls were given elementary education. 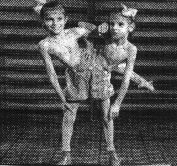 In 1964, the sisters were placed to a boarding school for children with motor activity failures in the city of Novocherkassk. But the administration and other children treated the sisters as mental defectives. Doctors even neglected nephritis that was very painful for the girls. In 1970, Dasha and Masha came to Moscow where they could live at an old people's home for some time. But when the old people's home was turned into a mental home the sisters had to leave the place. Unfortunately, the girls could not find any employment and place for living. They were on the brink of poverty and Dasha even took to drinking alcohol which was a serious problem for the other sister. Within the past years, Dasha and Masha Krivoshlyapova subsisted on money and food endowed by kind people. The twins died last spring at the age of 53 because of acute infarction with one of the sisters. Dasha remained alive for several hours after Masha died.

The fate of the above-mentioned Siamese twins would have been different if they were born in a different epoch. About 300 Siamese twins have been separated in the world since 1950 in their infant age. Last year, St.Petersburg doctors separated twins fused at their breasts and partially at stomachs. Doctors and the mother knew beforehand that the girls would be Siamese twins and were ready for an operation.

In March 2005, Russian doctors of Moscow's Filatov Children's Clinical Hospital performed a unique operation and separated Siamese twins from the republic of Kyrgyzstan, Zita and Gita Rezakhonova, 11. Doctors worldwide have never seen such pathology: the twins had one urinary bladder, two kidneys, one pelvis and three legs. European doctors would not perform such an operation and the parents took the girls to Moscow. The operation lasted for ten hours. The successful separation gave the girls a chance to enjoy their lives independently.

Often, surgical separation of Siamese twins entails serious moral and ethic problems. If twins have only one vitally important organ doctors know even before an operation that one of the twins will die after the operation. And it is almost always absolutely clear which of the two will die. It is the court that is to decide if Siamese twins having one vital organ will be separated or not.

August 8, 2000 Siamese sisters Jodie and Mary were born in Great Britain. It was clear from very beginning that only one of the girls, Jodie, was viable and Mary had defective blood and respiratory systems and just depended upon the sister's heart and lungs. The organism of Jodie would not have stood the double burden for longer than six months. So, the court had to decide whether the twins must be separated or not, a really hard decision judges said. If the court allowed separation of the twins it would mean death to Mary; if it rejected separation this would mean death first to Jodie and then to Mary. The parents strongly objected to separation. They wanted to obey the God's will and let both girls live their short lives. Finally, an operation was performed. It lasted for over 15 hours; as a result of it only Jodie survived as it had been supposed before.

Brothers Radu and Corneliy Papesku were born in Bucharest in 1980 fused at genitals. At the age of eight months they were separated; as a result of the operation Corneliy got the penis and Radu got the internal genitals. The boys developed normally after the operation. But each of the brothers felt that the other had deprived him of something important. And thus they often quarreled which is not typical of twins at all. At the age of 20, Corneliy said he felt he was a woman and wanted to change the sex. As a result of another operation Radu got the penis of the brother. The surgery brought peace to the Papesku family. Now the twins live happily as sister and brother.