Businessman Pavel Krasilnikov, 33, from the city of Minsk, Belarus, was absolutely depressed after his divorce and felt that he needed to have an exotic vacation. A travel agency recommended going to Pattaya in Thailand, the place also known as paradise for men where any of them, no matter married or singe, can find a "local wife" for the period of his staying in the country. The businessman decided to go to Thailand to have a good time and forget the nervousness of his divorce process. In the first evening of his Thai vacation Pavel went out for a walk and was attacked by a group of local prostitutes. The man thought that it would be nice to spend a night with such a girl and chose one that cost $30 for a night. 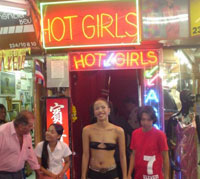 The girl named Phiraya was a tender and very passionate lover. Pavel confessed that sex with that girl was the first time in his life that he had such passionate romance. “She caressed me as if she knew all of my secret desires,” the man added.

Next morning, Pavel asked the girl if she would agree to stay with him for two weeks more and get $300 for the whole period. Phiraya agreed, and that turned out to be a wonderful bargain for both. The Thai was a clever guide: she told Pavel the story of her country in English, showed the most interesting places of interest to him and helped buy souvenirs.

So, the days and nights of the young man were fabulously happy and amazing. The girl made all nights especially ecstatic. When the vacation drew to its close Pavel realized that he seriously fell in love with his Thai lover. When departing, the Thai girl cried bitterly and asked the Belarus man to come back again. Pavel promised he would try to come to see her again.

When the man got back home and told the romantic story to his friends they explained that Phiraya was an ordinary prostitute and she wanted to keep up relations with the businessman only because she needed his money. They insisted that girls of the type never became good wives. But Pavel wanted none of their reasons as he was so much in love with the girl.

The separation was rather painful for Pavel, and one day he made a decision to go to Thailand one more time.

On his arrival to Pattaya, Pavel met his beloved and immediately proposed to her. The girl was extremely happy and said that Pavel was a unique man among all males she knew. But suddenly Phiraya burst into tears and said she could not marry him. The businessman was extremely surprised as he saw that the proposal was a really pleasant and desired surprise for the girl. But the explanation he got from the girl deeply shocked him. Phiraya said she in fact was a transvestite who used to be a man and became a woman thanks to surgery. The girl explained that it was still in her early childhood that she felt she was a girl. Two years ago, Phiraya borrowed money required for an operation from her friends and risked to change sex with the help of medicine. When it was clear that the operation was a success she began to think about covering the debt. Someone told her that she would make good money being a prostitute in Pattaya.

As soon as Pavel learnt the shocking truth he got awfully drunk. Next morning he realized perfectly well that he was still in love with the Thai girl and did not care at all about her past and the fact that she once was a man. Unfortunately, the couple could not marry officially as transvestites get no new documents after successful operations on changing sex. Officially, Phiraya is still a man.

Pavel and the Thai girl decided to live together. The man sold his business in Belarus and spent the money to buy a small house in Thailand. Now he is a rice exporter to the CIS, and Phiraya is a reliable assistant to him. The couple certainly can not have children but they would like to adopt some.

Changing sex with the help of surgery costs about $5,000 in Thailand which sounds a really huge sum as average wages make up $60 a month. However, sex with transvestites is popular in Thailand, and local clinics have lots of clients wishing to change their sex.