Angelina Jolie and Brad Pitt, two world-famous sex symbols, have signed a pre-nuptial agreement, according to reliable news sources. It transpired that the Hollywood stars are going to wed each other during the coming weeks.

Jolie insisted on signing this agreement to defend the rights of her adopted children, Maddox and Zahara, in case of divorce. Brad Pitt had nothing against. 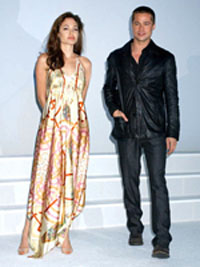 Two superstars, who recently visited earthquake-ravaged northern Pakistan, want to have their own children, but they say that they won't stop adopting more children. "Brad has always understood that she wanted to adopt more because she has such strong feelings about helping children born into poverty. But she would love to have Brad's baby too," a source was quoted as telling Britain's Grazia magazine.

Rumors say  that the controversial couple will hold the wedding ceremony at George Clooney's Italian villa.

The couple met during the filming of their summer blockbuster movie Mr. and Mrs. Smith while Brad was still married to Jennifer Aniston. Pitt and Aniston then split, and their divorce was finalized on October 2 of this year. If this date is accurate it means that Pitt remained single for about two months only.

Jolie, a goodwill ambassador for the United Nations, traveled with Pitt to a Pakistani village in a remote valley on an unannounced trip. The pair flew aboard a helicopter that brought food, blankets and other cargoes to improve shelters.

Pitt and Jolie, who arrived in the country on November 24, also visited the hard-hit town of Balakot and a tent camp for quake survivors who lost their homes in the Oct. 8 quake that killed more than 87,000 people, the vast majority in Pakistan.

Jolie took part in a news conference. She urged the international community to provide help for the country. Meanwhile, The National Ledger in the US reports that Jolie and Pitt had a Thanksgiving invite from his parents, Jane and Bill, in Missouri, but couldn't make it because of their travel plans.

The beautiful actress reportedly wants to go on television to tell the world about her relationship with Brad. A source said: "Angelina's told Brad it's time they came clean about their relationship on TV. She's just looking for the right show to set the record straight."