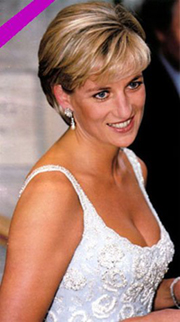 The tragedy happened on 31 August 1997 when Diana died in a crash in a tunnel under the Place dу l'Alma in the centre of Paris. At that time the most reasonable explanation was the intoxication of the driver and simple misfortune. But what did actually happen? Several years after the tragical day several facts made people look at the accident at a different angle.

In 2003 The Daily Mirror published a letter that was written by Diana herself and given to her butler Paul Burrell ten months before her death. It came as a real surprise.

At that time, in 1996, Lady Di was already worried that her life was in the most dangerous state and that someone (whose name the British newspaper did not mention) wanted to do away with her, plotting a car accident. Such turn of the events would have let her husband Prince Charles marry for the second time without any trouble. According to Princess Diana British system had been was torturing her morally the last 15 years of her life. The Princess felt there was something threatening her life, as anybody would have a presentiment of calamity. But did she really know about the plot? And was it really a plot?

One of the first people to suggest such a version was the billionaire Mohamed Al Fayed, the father of Dodi Al Fayed who was killed in the accident together with Diana. French special services that were investigating the accident made a conclusion that Diana's Mercedes driven by Henri Paul bumped into Fiat of a paparazzi when attempting the overtaking. Henri Paul tried to escape the prang and bumped into the 13th pillar of the tunnel.

According to Mohamed Al Fayed, the driver was guilty of the accident. However, his version is different from thу official one about the intoxication. The billionaire claims that the state of intoxication was a fake made up by the doctors who were already involved in this business. Besides, according to Al Fayed Paul was the informant for British M16 secret service. Another fact that seems strange is that the photographer James Andanson who was driving Fiat Uno died in strange circumstances in 2000. His body was found in a burnt-out car in the woods. Police decided it was a suicide. Al Fayed's opinion is different, though.

Another strange occurrence is that several weeks after his death there was an assault upon the agency where he had been working before. The staff was held hostages by some armed people who then escaped with photo materials and equipment. The police was trying to conceal these facts and almost succeeded in this.

Even stranger seems the fact that the watching cameras that would always control the route from the Ritz hotel where Diana and Dodi had been living at that time happened to be turned off.

British M16 special service officer Richard Tomlinson provided interesting information under oath. Right before the accident, for instance, two M16 special agents came to Paris. Besides, there was an agent in the very Ritz hotel. Tomlinson is sure that it was Henri Paul that worked as an informant for the service. That can probably explain why he had £2000 cash in his pocket and £100000 on his account when his salary was only £23000 a year.

As far as the official version about the accident is concerned, it is pretty shaky and is based on circumstantial evidence mainly. First of all, the driver's body was exposed to the sun for quite a long period of time after he had died. It was quite hot and the blood began to ferment immediately. Thus, the fact the driver had been drinking before the accident is questionable. The irrefutable proof that the driver was an alcoholic is that he was taking tiapride that is usually prescribed to alcoholics. However, tiapride is already used as a tranquilizer or sleeping-draught. Henri Paul could have used it for this purpose taking into account that he had just quarreled with his relatives.

The post-mortem examination did not prove that Paul was an alcoholic. At the same time Mohamed Al Fayed's sources claim that the driver's blood contained carbon monoxide that could upset the vital functions of the organism. It remains a mystery this could happen. French special services may know something about this fact, though.

Why the cameras did not function in the tunnel and the hotel staff did not notice there were problems with them? It could have been a coincidence or a misfortune. But what did actually happen? It is possible that we will never find out the truth although there is hope that the French special service will reveal something.